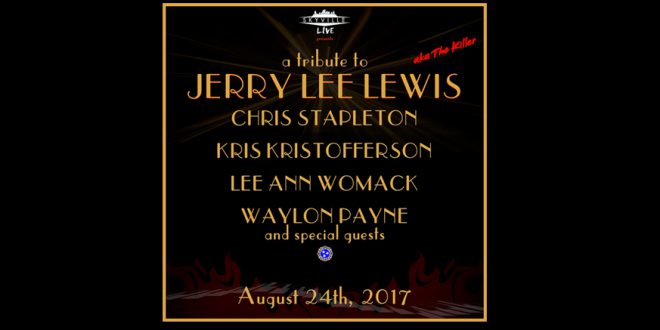 Online music series Skyville Live has announced the addition of Kris Kristofferson and Waylon Payne for a special show in honor of Jerry Lee Lewis on August 24. The evening’s lineup continues to grow as these performers join previously announced appearances from Chris Stapleton and Lee Ann Womack, and additional artists will be announced prior to the show.

“This is going to be a tremendous night of music packed with so many memorable moments,” commented Wally Wilson, creator of Skyville Live. “We pride ourselves on being a show that artists really enjoy doing, and the amazingly talented group coming together to celebrate Jerry Lee Lewis will make it a great night for everyone and surely lead to some more of the fantastic collaborations we’ve seen on the Skyville Live stage.”

The show will film live in front of a studio audience in Nashville on August 24 and streaming details will be announced at a later date. The latest edition of Skyville Live will also feature the Skyville Live band of industry elites. Led by guitarist Kenny Greenberg, the band features the best session musicians around including Mike Rojas (keys,) Mickey Raphael (harmonica,) Fred Eltringham (drums,) Justin Schipper (pedal steel/utility) and backup singers.

Unique and unexpected pairings will add to the growing list of once-in-a-lifetime collaborations delivered by Skyville Live, from Lady Antebellum, Jason Isbell, Jewel, Brandy Clark and Amanda Shires bringing down the house with Kris Kristofferson on his classic “Me and Bobby McGee” to a fiery take on “Come to My Window” with Cam joining Melissa Etheridge on stage to the impassioned performance of Steve Earle’s “Pilgrim” featuring the acclaimed songwriter alongside Emmylou Harris, Brothers Osborne, Margo Price and Colter Wall.

Previous Take a Step Back, Relax, and Enjoy Del Frisco’s Happy Hour
Next DYLAN SCOTT SURPRISED WITH FIRST CAREER GOLD FOR “MY GIRL”