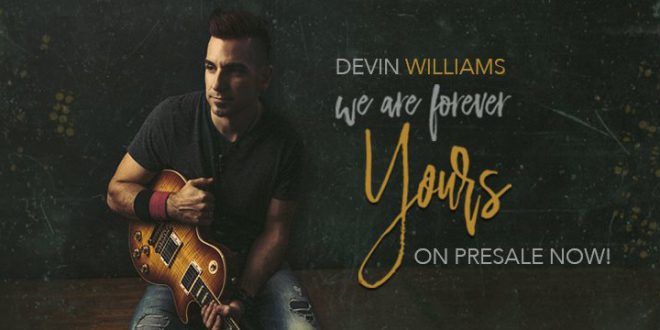 Making the album announcement live from the Freedom Celebration with Tenth Avenue North just north of Nashville, TN on July 2, Devin Williams’ new worship album We Are Forever Yours will be available at all online retailers on August 4 with an exclusive pre-sale available now on iTunes. The album features the quickly rising Christian airplay single Hear Our Hearts Sing.

“I’ve served as a Music Leader for over 12 years at a variety of churches during the gaps between tours and I’ve always felt a calling that one day I’d put together a full worship album,” says Devin. “I’m so excited to finally share this album with the fans and churches. I hope these songs can connect with them the way worship albums by Hillsong United and Jesus Culture helped fuel my faith.”

Fans can pre-order We Are Forever Yours on iTunes by clicking here. His latest release Hear Our Hearts Sing, which is quickly climbing the Billboard Christian Charts, was a song that Devin penned about truly casting all of your cares on God and letting Him fill you with love and compassion. “I believe that deep inside of all of us there lives a desire to walk with our Creator like Adam did in the ‘cool of the day’ in the Garden of Eden. If we were to listen close enough, perhaps we could hear our hearts singing to him.” Chart-topping Christian acts like SonicFlood and Third Day have been singing Devin’s praises on his faith and his power to deliver God’s message through his music. “His voice is amazing, his talent is very evident and his heart and commitment to seeing God work through him is steadfast and contagious,” says SonicFlood’s Jeff Deyo.  Mac Powell of Third Day recalled how he was not only impressed by his music, but by his desire to spread the message of God’s love and grace.  “You won’t be disappointed! I believe God has something special for this guy,” says Powell.

To stay updated on this husband and father of three boys, visit the following:
Website: www.devinw.com
Facebook: www.facebook.com/devinw/
Twitter: @Devininc
Instagram: www.instagram.com/devininc/
YouTube: www.youtube.com/user/devinwilliamsmusic
About Devin Williams
Devin Williams, six-time Billboard Top 30 Christian artist, fulfills fans’ and church music leaders’ requests with the forthcoming release of his new worship album We Are Forever Yours. Serving as a worship leader at Grace Baptist Church and for a variety of other churches for 12 years when he wasn’t on the road, Devin saw firsthand the passion and unhindered emotions that can truly connect to the heart when the worship music is chosen for a service. It is that divine insight on how a song’s connection differs from a concert audience to a church that lead him to this current album. For those unfamiliar with Devin, this husband and father of three boys doesn’t just emulate the truth through his music, but he also serves as a role model to all men to serve God and honor your partner while guiding your children and the community to a more positive and encouraging light that is sourced via one’s faith. It comes as no surprise that he has impacted audiences throughout the world sharing the stage with for King and Country, Tenth Avenue North, Building 429, Family Force Five, KJ52, Fireflight, SonicFlood’s Jeff Deyo, and Rapture Ruckus. On the Billboard Christian Rock charts, he has charted the following singles Destruction of Kings (#15), I Will Overcome (#18), Eraser (#23), Feel You Falling(#24), Here for You (#27) and Save Me (#30). Fans can pre-order We Are Forever Yours on iTunes now with the project landing at all online retailers on Friday, August 4.
ShareTweet

WATCH: Behind The Scenes, Blake & Gwen’s “Nobody But You”