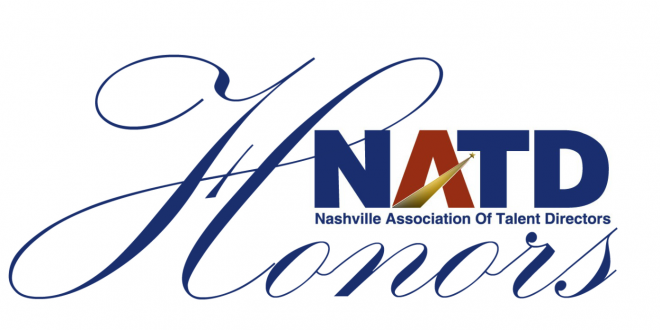 Nash Nights Live’s Shawn Parr and WKRN’s Stephanie Langston will return as emcees of one of Nashville’s premiere events, the 7th Annual NATD Honors Gala. The Nashville Association of Talent Directors announced six highly-respected individuals earlier this year who will be recognized at the event scheduled for November 14, 2017 at the Hermitage Hoteland presented by the Grand Ole Opry and Springer Mountain Farms. Tickets can be purchased HERE.

“We are excited to have Sean and Stephanie back with us once again! I am also pleased to welcome the Grand Ole Opry and Springer Mountain Farms as our presenting sponsors, cultivating the bond between a beloved country music staple, a major nation-wide brand and the venerable NATD organization,” said Steve Tolman, President of NATD’s Board of Directors.

The Gala will begin with a reception at 6:00 PM, followed by dinner and the awards ceremony. For tickets and sponsorship information, visit www.n-a-t-d.com.

The 7th Annual Honors Gala will feature surprise appearances and performances from well-known celebrities, special moments and splendid company. It has truly become one of the most anticipated evenings for the Nashville entertainment industry and business community.

About NATD
The Nashville Association of Talent Directors (NATD) was founded in 1958 and professionally represents, directs, and promotes the entertainment industry through its members. Today those members generate over $300 million dollars annually for Nashville-based artists. The organization not only serves as a forum for idea exchange among its members, it also serves as a vehicle for other facets of the industry to share information vital to the overall growth of the Nashville music and entertainment industry. NATD members foster camaraderie among “friendly competitors” which seems to be unique to the close-knit Nashville music and entertainment community. As part of its philanthropic program NATD provides scholarship funds for students showing exemplary performances in academics, civic duties, and personal goals. For more information, please visit www.n-a-t-d.com.

About Stephanie Langston
As a Nashville native, Stephanie has been working at WKRN for more than a decade holding positions as an Entertainment Reporter, Video Journalist and morning Anchor. Throughout her career, Stephanie has covered nearly every star-studded event in Music City earning an Emmy nomination along with being voted “Best of Nashville” TV personalities in the Nashville Scene and nominated among the Best TV Anchor/Reporters in the Tennesseans Toast of Music City. You may also recognize Stephanie from the big screen, she has landed Reporter rolls in the movies Country Strong, Furious 7, Logan Lucky and the TV series Nashville.

About Shawn Parr
Shawn Parr has been the voice of Country Music for almost 30 years. Born and raised in Southern California he now resides in Nashville Tennessee and is currently hosting the Nationally Syndicated Radio show “Nash Nights Live with Shawn Parr” for Cumulus Broadcasting heard on over 100 stations nationwide. Shawn is the voice for The Academy of Country Music Awards, The Golden Globes, American Music Awards, and has also been featured on numerous nationwide specials. Shawn has not only succeeded in the world of hosting, voice-over, and radio, he has also made the transition into acting on television and in movies. Shawn has recently had TV roles on ABC’s Nashville and played a detective on NBC’s Heist. Shawn’s movie roles include Curtis Hanson’s Lucky You with Drew Barrymore, Robert Duvall & Eric Bana, Waist Deep starring Tyrese Gibson and Death and Texas starring Steve Harris, Andy Richter, & Charles Durning. As a scratch golfer, Shawn has hosted his own charity golf tournament for the John Tracy Clinic for hearing-impaired children and has helped raise over 1 million dollars for the clinic. Shawn has served on the Board of Directors for the Cystic Fibrosis Foundation for over 20 years and also serves on the Board of Directors for Nashville’s T.J. Martell Foundation.  Shawn has also donated time, money, and effort to numerous charities throughout Southern California and the country. On his show Nash Nights Live the theme is to “#GiveBack” and as long as Shawn has a voice the word NO will not be a part of his vocabulary.

Previous MERLE HAGGARD MUSEUM AND RESTAURANT TO FIND A PERMANENT HOME IN MUSIC CITY’S DOWNTOWN
Next Country Music Legends, The Oak Ridge Boys Launch Their Suit Line With A Mission To Bring Jobs Home To America