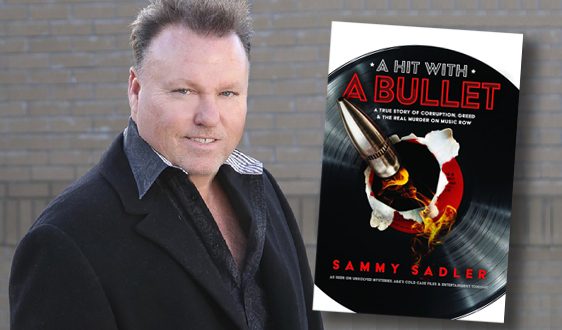 Sammy Sadler Releases Story Behind The “Murder on Music Row”

The story of the infamous “Murder on Music Row” continues to capture national attention thirty years later with the release of Sammy Sadler’s biographical thriller, “A Hit With A Bullet”, which features a foreword by former Country Weekly editor, Larry Holden, is available Amazon, Indigo River Publishing, and other retail outlets.

“A Hit With A Bullet”, which took over 10 years to complete, chronicles Sadler’s personal and sensational journey from wide-eyed, promising, Top-40 newcomer who was rapidly climbing the charts with a “bulleted single,” to “person of interest” and survivor of one of the most infamous killings in the music business–one that left a leading trade magazine chart director dead on Music Row’s famed 16th Avenue and a recording artist bleeding out in a nearby apartment in the heart of the Country music community. Sadler recounts his struggle to recover from his nearly-fatal injuries, the turmoil endured during the 13-year, career-throttling investigation, the reinforcement of his faith, the reconciliation of bittersweet justice, and his resilient passion music that would allow him to move forward and continue to pursue his career.

“I came to Nashville to make my mark, but instead, the industry left its mark on me,” explains Sadler. “It’s a story that so many people, even thirty years later, are still reluctant to tell because it was a black eye for the entire industry,” he continues. “But I’m still here; God only knows why…perhaps my story can help a few people by opening their eyes to the kinds of things that can happen.”

“I hope this book will not only lift the cloud that has been over me for so many years but give a voice to Kevin, who lost his life trying to keep things honest and fair,” he says. “I guess I also want it to be a bit of a warning to those starry-eyed dreamers who want to come here to work and build careers in the industry–it’s full of all kinds of people, and full of smoke and mirrors. My advice to them is don’t let your passion and desire blind you. Make sure you check out the people that you work with, but more importantly, don’t, whatever happens, let your passion die because of other people or circumstances. Keep the faith and go and get what is rightfully yours.”

Music editor for Nashville.com. Jerry Holthouse is a content writer, songwriter and a graphic designer. He owns and runs Holthouse Creative, a full service creative agency. He is an avid outdoorsman and a lover of everything music. You can contact him at JerryHolthouse@Nashville.com
Previous Jimmie Allen Premieres New Video Shot In Franklin And Nashville
Next CMA Fest Announces Additional Performances At Xfinity Fan Fair X