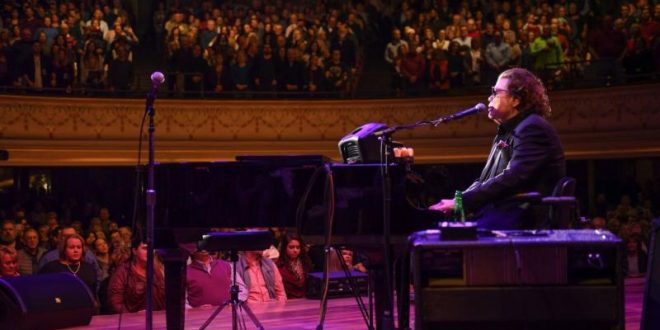 When the curtain rose at the historic Ryman to the surging “Prisoner of the Highway,” Ronnie Milsap returned to the Ryman Auditorium with a full command of his 40 #1s. Dressed all in black, the Country Music Hall of Famer celebrated his birthday and a catalogue of country hits and crossover hits that reaches back five decades.

“I wanted to do something more for my birthday than have dinner with friends and my beautiful wife Joyce,” Milsap said of the show. “And I thought, ‘Well, there’s nothing I love doing more than playing music… and there’s no better place to do that than the Ryman Auditorium, so why not throw a show for the party?”

With the help of WSM-AM, who came on board to make Milsap’s kick-off for the 76 For 76 Tour, a Listener Appreciation Show, the night made good on The Tennessean’s A-1 headline, “Retirement Is Not In Milsap’s Vocabulary.” With only a handful of obstructed view and single tickets left, Nashville turned out to hear “Stranger In My House,” “Snap Your Fingers,” “(There’s) No Gettin’ Over Me,” “Almost like A Song,” “I Wouldn’t Have Missed It For The World” and so many more

Like every good birthday, there was a present. Former RCA/BMLG/Sony Chief Joe Galante, who’d presided over the label during Milsap’s unprecedented run, was joined by Cumulus Radio’s Mike McVey to present the 4-time Country Music Association Album of the Year winner with a plaque commemorating 40 Million albums sold over the length of his storied career.

And like every good birthday party, there was cake. In this case a blue and white cake delivered by Little Big Town, who not only helped lead the audience through “Happy Birthday,” but also offered a magical reprise of “Lost in the 50s,” their track from the Duets being released tomorrow.

“My team knows I don’t like surprises,” Milsap said laughing after the show. “But when they’re surprises like Little Big Town, who sound like angels when they sing, coming out with a birthday cake, I can only think about what a blessed and lucky man I am. I’ve spent my life inside the music, and to make music with folks like Karin, Kimberly, Jimi and Phillip is the most wonderful thing in the world.”

Receiving multiple standing ovations throughout the night, the six-time Grammy winner gave a master class in the convergence of hard country, doowop, rock and roll and old school soul. With American Songwriter citing Milsap’s “gift for interpretation,” Entertainment Weekly hailing, “the staying power of his hits.” and The Nashville Scene raving,”The Duets Reveal the Soul of a Country-Pop Master,” Milsap’s latest album – featuring George Strait, Kacey Musgraves, Luke Bryan, Dolly Parton, Jason Aldean, Lucy Angel, Billy Gibbons, Montgomery Gentry, Jessie Key, Little Big Town, Leon Russell and Willie Nelson – arrives after two years in the making. Just as importantly, the man who lives to play is doing just that as he heads into his 77th trip around the sun: taking it the music to the people.

Music editor for Nashville.com. Jerry Holthouse is a content writer, songwriter and a graphic designer. He owns and runs Holthouse Creative, a full service creative agency. He is an avid outdoorsman and a lover of everything music. You can contact him at JerryHolthouse@Nashville.com
Previous CMA Announces Triple Play Award Winners
Next Morgan Evans Celebrates His First Number One In The U.S.