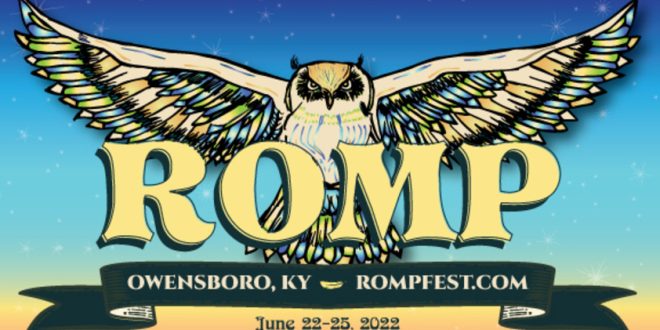 It’s just a short trip from Nashville and ROMP Festival has just announced their headliners for 2022: Punch Brothers, The Del McCoury Band, Rhiannon Giddens, and Tommy Emmanuel. The Grammy-winning Punch Brothers return to ROMP Festival for the first time since 2017. Inducted into the Hall of Fame in 2011, Del McCoury is a genernational favorite for all fans of bluegrass music. Giddens first appeared at ROMP in 2011 with the Carolina Chocolate Drops, which became a touchstone performance for the festival and earned Giddens a dedicated following of ROMP fans. Guitar master Tommy Emmanuel returns after a very popular appearance at ROMP in 2021.

Also on the initial lineup, We Banjo 3 brings with their Celtic-inspired bluegrass to the festival, and 2012 & 2013 IBMA Entertainers of the year, The Gibson Brothers, make their first appearance. Rounding out the initial lineup are: Rob Ickes & Trey Hensley, The Po’Ramblin’ Boys, East Nash Grass, and Liam Purcell & Cane Mill Road. More artists will be announced at a later date!

ROMP will be held at Yellow Creek Park, located in Owensboro, Kentucky. Festival tickets and camping passes are on sale now at holiday prices.

Music editor for Nashville.com. Jerry Holthouse is a content writer, songwriter and a graphic designer. He owns and runs Holthouse Creative, a full service creative agency. He is an avid outdoorsman and a lover of everything music. You can contact him at JerryHolthouse@Nashville.com
Previous WATCH: Frank Myers’ “If Everyday Could Be Christmas”
Next Dickson County Craig Morgan Foundation To Provide Christmas Gifts For Foster Kids