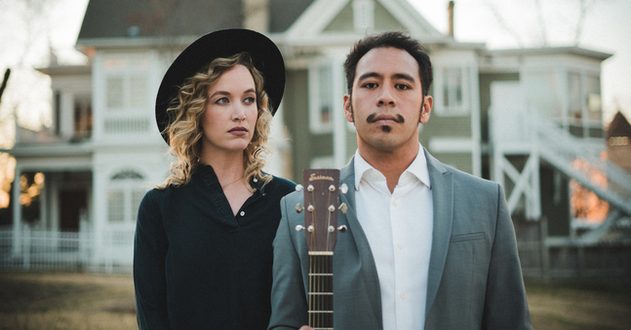 Robin Alice Announces Their New EP “Here and There”

Robin Alice is the unexpected pairing of songwriters Kelley Jakle and Jeff Hortillosa. Jakle, who appeared in all three Pitch Perfect films, crossed paths with Jeff Hortillosa, member of punkgrass outfit Whiskey Shivers, on the set of the franchise’s third installment. During filming, the pair began playing music together, and from the very start, their diverging backgrounds made for compelling art. Today, Robin Alice announces the release of their forthcoming EP Here and There (out June 14th), and unveils their smoldering new single “Late Bloomer” (listen here) “Combining a ‘60s vibe with classic guitar riffage, the song also appears in the Netflix movie Walk. Ride. Rodeo. “Late Bloomer,” was the first one that Jakle and Hortillosa created together.

Both bandmates had already left unique marks upon the music world by the time they crossed paths on the movie set of Pitch Perfect 3. A Kentucky native, Hortillosa cut his teeth as a member of Whiskey Shivers, an unconventional bluegrass band more grounded in punky, rule-breaking spirit than traditional twang. Meanwhile, Jakle had grown up in California, where she played coffeehouse gigs as a teenager before winning a handful of international titles with her college a cappella group. When she launched a parallel career as a Hollywood actress after graduation, those vocal chops landed her a recurring role in the Pitch Perfect series.

“Our voices balanced each other out,” remembers Jakle, who’d earned a nickname on the Pitch Perfect set — “the professional” — for her a cappella experience and vocal ability. “My voice lightens his, and his voice gives mine more depth. Our songwriting styles and our backgrounds really complement each other, too. It was an immediate fit.” When the cameras stopped rolling, the two continued working together, trading musical ideas via email and reuniting in Austin for a series of studio sessions. Steadily, what began as an informal collaboration upon the Pitch Perfect 3 set turned into a proper duo, with the bandmates looking to a variety of influences — including Fleetwood Mac’s harmony-heavy rock, St. Vincent’s complex pop arrangements, Allison Krauss’ swooning folk, and even 1960s psychedelia — as touchstones. It was a collaborative sound that allowed Hortillosa to flex his muscles as a diverse multi-instrumentalist, flanking Jakle’s elastic voice with layers of interlocking guitar, bass, synthesizer, and percussion.

Recorded in Austin-area studios like the Bubble and Waterslide, Here and There finds Robin Alice working alongside Grammy-winning engineer Chris “Frenchie” Smith. The five-song record also shines a light on the diversity and melodic chops at the core of the band’s sound, blurring the lines between genres that don’t often rub shoulders. There are horn arrangements, dream-pop influences, breakup songs, and plenty of coed harmonies. There’s plenty of sharply-written lyrical insight, too, with songs like “Greed” attacking America’s consumerist obsession. “When we were writing songs,” Hortillosa says, “we didn’t think of any limitations. We just allowed ourselves to be strange and creative. It was no-holds-barred approach. I’m from a bluegrass/Americana background, and Kelley is from more of a pop/rock background… so we worked together and found our own middle ground.”

Robin Alice isn’t a person. It’s a band. A collaboration. A merging of musical worlds, with both songwriters contributing heavily to all aspects of the writing and recording process. Named after members of Jakle’s family, the duo finds its two members nodding to their influences while still forging their own sound. “Late Bloomer” will be available digitally on March 22nd.

Music editor for Nashville.com. Jerry Holthouse is a content writer, songwriter and a graphic designer. He owns and runs Holthouse Creative, a full service creative agency. He is an avid outdoorsman and a lover of everything music. You can contact him at JerryHolthouse@Nashville.com
Previous Blake Shelton Opens Second “Ole Red” In Gatlinburg
Next Award-Winning Guitarist Duke Robillard To Release “Ear Worms” May 17