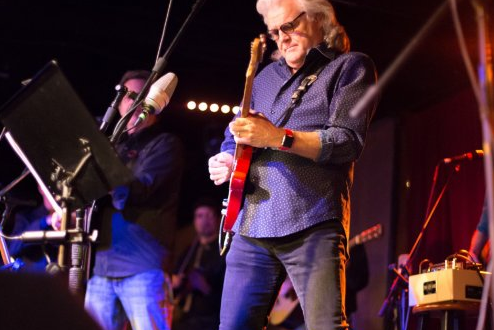 For the first time in two decades, the legendary Ricky Skaggs is returning onstage to perform a full-blown country music concert featuring the hit songs that made him a household name. On Saturday, September 2, at 7:00 PM, Skaggs will appear live at the Nashville Palace in Nashville, Tennessee where he’ll plug-in and perform his tunes from the ’80s.
“After playing bluegrass music for the last 20 years, I’m gonna have blast plugging in my electric guitar and singing my country hits again,” says Skaggs. “Can’t wait! We did a test run of the show back in June and came away from it feeling great!”
Skaggs promised the late Bill Monroe that he’d do his part to keep bluegrass alive. Since Monroe’s passing in 1996, Skaggs has kept his promise, playing thousands of live bluegrass shows and releasing several albums dedicated to the genre. While he has no plans of ever quitting bluegrass music, he feels it’s time to dust off the songs that made him famous.
Those in attendance can expect to hear Skaggs perform many of his chart-topping songs including “Highway 40 Blues,” “Honey (Open That Door),” “Heartbroke,” “Country Boy,” and “Uncle Pen,” among others.
Tickets to Skaggs’ country show go on sale today and can be purchased by clicking HERE. Prices range from $20-$200. The Nashville Palace is located at 2611 McGavock Pike in Nashville.
About Ricky Skaggs

Earning 12 #1 hit singles, 15 GRAMMY® Awards, 11 IBMA Awards, nine ACM Awards, eight CMA Awards (including Entertainer of the Year), two Dove Awards, the ASCAP Founders Award, three honorary Doctorate degrees, inductions into the Musicians Hall of Fame and GMA Gospel Music Hall of Fame, the 2013 Artist-In-Residence at the Country Music Hall of Fame and Museum, an Americana Music Association Lifetime Achievement Award in the Instrumentalist category along with countless other awards, Ricky Skaggs is truly a pioneer of Bluegrass and Country music. Since he began playing music more than 50 years ago, Skaggs has released more than 30 albums and has performed thousands of live shows. He started his own record label, Skaggs Family Records, in 1997 and has since released 12 consecutive GRAMMY®-nominated albums. His latest release, Hearts Like Ours, with his wife, celebrated artist Sharon White of The Whites features the couple dueting on handpicked country love songs. And the Grand Ole Opry member has released his first-ever autobiography, “Kentucky Traveler.” The book details the life and times of Skaggs and provides a descriptive history of Country and Bluegrass music, as told by the master himself. In addition to his regular touring schedule with his band, Kentucky Thunder, he recently performed a string of dates with his better half Sharon White along with guitar legend Ry Cooder on the critically-acclaimed “Cooder-White-Skaggs” tour and from time to time hits the road with versatile singer/songwriter and pianist Bruce Hornsby on another critically-acclaimed tour, “Ricky Skaggs & Bruce Hornsby with Kentucky Thunder.”