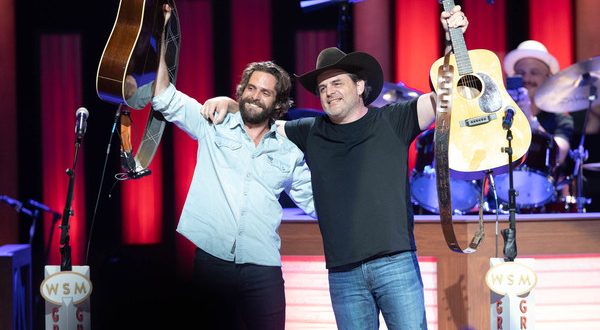 The Grand Ole Opry welcomed award-winning singer/songwriter Rhett Akins and multi-platinum selling artist Thomas Rhett for performances in front of a sold-out audience tonight. It was the first-time father and son played the Opry on the same evening and the first time they took the Opry stage to perform together.

Rhett took the stage first to perform his #1 hit “That Ain’t My Truck” and also entertained the crowd with the #1 song he wrote for Opry member Blake Shelton, “Boys ‘Round Here.”

Thomas Rhett followed with several of his hits including “Die A Happy Man,” his current single “Country Again,” and “Sixteen.” As his father was joining him on stage he said, “Do y’all understand how freakin’ cool this is right here? We are going to play a song we wrote together. It’s the first single off my latest album.” As Rhett was beaming at the joyful moment he was sharing with his son he said, “This is unbelievable. You were over there {pointing to side of stage} at two years old watching me play. We’ve written songs in the kitchen since you were eight years old and now we are singing one we wrote together on the Grand Ole Opry that went to #1!” After singing “What’s Your Country Song” the crowd cheered with a standing ovation.

Thomas Rhett closed his set with “Things Dads Do” as a nod to Father’s Day coming. “Of all the songs I’ve written with my dad, this is probably my favorite,” he added.

On October 30, 2021, the Opry, the world’s longest-running radio show, will mark a historic, record-breaking milestone with its 5,000th Saturday night broadcast.

Music editor for Nashville.com. Jerry Holthouse is a content writer, songwriter and a graphic designer. He owns and runs Holthouse Creative, a full service creative agency. He is an avid outdoorsman and a lover of everything music. You can contact him at JerryHolthouse@Nashville.com
Previous LISTEN: Los Lobos Premieres “Misery”
Next Carrie Underwood Releases First Live Performance DVD