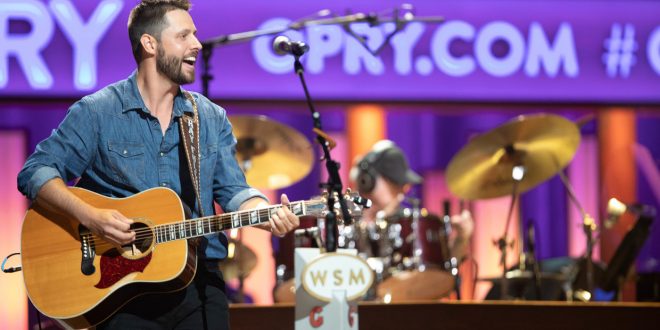 Friday (6/25) was one of those “Bucket List Beers” kind of nights for the artist with 30+ million artist streams and 3 billion streams as a songwriter, as Ray Fulcher stepped into the circle of the Grand Ole Opry stage for his debut performance. The day marked another first for Fulcher with the release of three new songs — “Bucket List Beers,” “Way Out,” and “Girl in It,” his first single going to Country radio as an artist on Black River.

Stepping into the legendary circle to perform for the first time, Fulcher took in a warm reception from a rowdy full house and jumped right into his debut single on Black River, “Girl in It.”

“Lord have mercy,” said Fulcher upon finishing his first song. “I’m in the Grand Ole Opry circle. I can’t believe it y’all.”

Leading into his second song, Fulcher shared a story with the audience about finishing a song while on tour. “I was in New York City, and there was a song that we wrote…we could never figure out what to do with the second verse…so I called my dad because he retired that day.”

Fulcher gave his parents, who were in the audience that night, a shout-out and continued. “I hung up the phone with him and said, ‘There’s my second verse.’ This is a bucket list moment for me tonight, and it would only be fitting we do this song. It’s called ‘Bucket List Beers.'”

The excitement and energy of the evening built up to Fulcher’s third and final song, where he stripped away all but himself, a guitar and a story. “I’m from a little town called Harlem, GA. I went to the University of Georgia, ‘Go Dawgs’. While I was there, I went and saw an Eric Church concert for the first time. I knew right then what I had to do with my life. It took me 14 years from then ’til now to get on this stage.”

Fulcher continued, “I got a Master’s degree, and I moved back home to Harlem, and for a year, I sold cars, and I turned down a teaching job because I wanted to be able to play music still .I remember standing out there on that Saturday asphalt one day when it was about 97 in the shade, and I said, ‘If I ever get a chance, I’m gonna write a song about this.'”

Before playing the unreleased song, “Selling Cars,” Fulcher thanked the Grand Ole Opry. “Thanks to the Opry for having me tonight. There’s not a more special place, in all of music, in all of country music, and I’m a very blessed man to be standing in the circle tonight.”

“Selling Cars” began to lyrically paint the picture audience members had learned from Fulcher just two songs ago. From daydreaming on a hot car lot to seeing the Chief play “Lightning” and Fulcher keeping his dream of playing music alive, “These half-empty rooms don’t give a damn about the dues I’m paying….” The audience erupted in cheers when Fulcher hit the hook, “…But it sure beats the hell out of selling cars.”

The full-circle moment proved too much for Fulcher, and a handful of words into the second verse, he succumbed to the power of the Grand Ole Opry and stepped away, choked up and wiped away tears in front of a roaring crowd, swept away with him. All leading up to a standing ovation and an Opry debut to celebrate with a “Bucket List Beer.”

Music editor for Nashville.com. Jerry Holthouse is a content writer, songwriter and a graphic designer. He owns and runs Holthouse Creative, a full service creative agency. He is an avid outdoorsman and a lover of everything music. You can contact him at JerryHolthouse@Nashville.com
Previous Dierks Bentley Scores His 20th Career #1
Next Alabama To Kick Off “50th Anniversary Tour” In Nashville