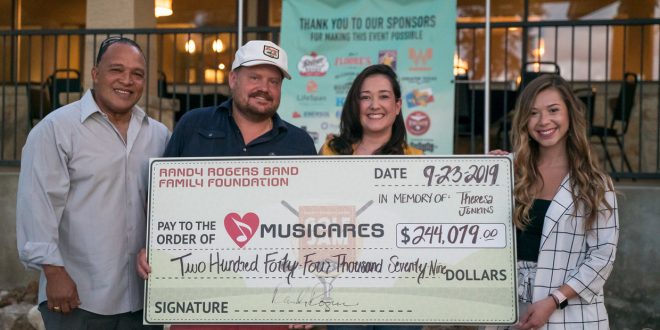 Randy Rogers Band hosted its eleventh annual Golf Jam this weekend at River Crossing Golf Club in Spring Branch, TX. Presented by Shiner Beers, the two-day event kicked off Sunday evening with a powerful songwriters round featuring Rogers, Wade Bowen, Jon Randall, and Jim Beavers, and continued on Monday with a charity golf tournament at one of the Hill Country’s premiere courses. Proceeds for the two days were donated to MusiCares by the newly-established Randy Rogers Family Foundation.

A yearly tradition since 2009, the Charity Golf Jam & Tournament broke new ground this weekend. After raising more than $750,000 in funding for charities across Rogers’ native Texas during the past decade, the Golf Jam went national this year, with MusiCares serving as the event’s benefitting charity. As the eleventh annual Golf Jam drew to a close on Monday, a donation of $240,000 — raised with the help of sponsors’ contributions and in-kind donations — was presented to MusiCares courtesy of Randy Rogers Family Foundation, a brand new 501(c)(3) organization co-founded by Rogers himself. RRFF is in its first year of operation, and was created to funnel donations to charities with which Rogers is affiliated. To add another personal touch, the Randy Rogers Family Foundation’s gift was donated in memory of Theresa Jenkins, a longtime friend who served as the senior executive director of the Recording Academy Texas Chapter for 15 years before losing her battle with esophageal cancer earlier this summer.

Jenkins was one of the longest-serving directors of all 12 GRAMMY chapters across America. A true champion for Texas’ thriving music community, she left a mark on countless musicians statewide, including Rogers.

“Thanks to all the volunteers and golfers that made this year such a great success. It never ceases to amaze me the generosity Texans display when called upon,” says Randy Rogers. “I am so proud of this year’s event.”

Meanwhile, Randy Rogers Band continues to support Hellbent with a string of cross-country tour dates. Included in the mix are three newly-announced arena shows opening for Miranda Lambert on Feb. 6, Feb. 7, and Feb. 8, as well as a bucket-list performance at the Ryman Auditorium in Nashville on April 3, 2020. For a band that will celebrate its 20th anniversary next year, there’s no better way to commemorate two decades of music than with friends and fans in concert.

Music editor for Nashville.com. Jerry Holthouse is a content writer, songwriter and a graphic designer. He owns and runs Holthouse Creative, a full service creative agency. He is an avid outdoorsman and a lover of everything music. You can contact him at JerryHolthouse@Nashville.com
Previous Calling All Music Teachers!
Next Bid Loud Records Signs Singer/Songwriter Earnest