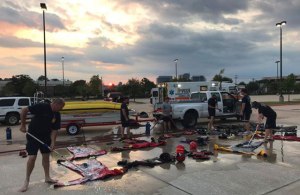 Members of Nashville Fire Department are on their way back from Texas where they assisted in rescue and recovery efforts after Hurricane Harvey tore through the area.

Harvey is gone but not the devastation left behind from this massive storm.

In true Tennessee volunteer spirits, local organizations and departments have been down in Texas for days now to help.

The Nashville Fire Department has a team of firefighters in Houston now. They have been there for days rescuing people and helping people with whatever they need.

They’ll be headed back home to Nashville soon.

“The area that we worked was off of the Buffalo Bayou just west of Houston, and we were telling people it was going to be weeks before the water went down,” explained Chief Larry Climer.

He continued, “At that time, people would make a decision that it was time to leave because they were sheltered in place for so long they did not receive notification.

The chief said it was hard for people to receive notifications other than phone calls .

Brentwood and Williamson County departments are also still in Texas helping. The Goodlettsville Fire Department sent a crew down there, as well as the Tennessee Task Force 4.

But the list doesn’t stop there. Dozens of other fire departments, EMS crews, and police departments have sent teams to Texas, including Lebanon.

Montgomery County Ems also has a crew in Houston. Their initial job was to help get people safely out of their homes. No word yet on how long they’ll be there.

Murfreesboro Fire and Rescue along with Rutherford County are also there, and they are all supposed to be heading home in the next couple of days.

The Ashland City Fire Department is also there. They said Tuesday morning their teams are headed back home and ask everyone to continue to keep the people of Houston and surrounding areas in their prayers, as well as Florida.

And on Monday, special Rutherford County Special Operations and the Murfreesboro Fire Dpartment spent the day helping flood victims in some of the worst hit neighborhoods.

There are several other departments from Middle Tennessee still in Texas. We’re awaiting updates on when they’ll be home.