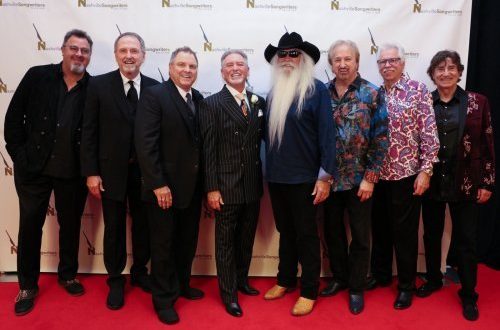 Last night, October 14, country music legend Larry Gatlin was formally inducted into the Nashville Songwriters Hall of Fame. The 49th Anniversary Nashville Songwriters Hall of Fame Gala was held at Nashville’s Music City Center where Gatlin was inducted in the Veteran Songwriter/Artist category by his longtime friend Vince Gill.
Moments before his induction, Gatlin was honored with special performances of two of his self-penned hits songs: “I’ve Done Enough Dyin’ Today” (performed by Gill, Steve Gatlin and Rudy Gatlin) and “All the Gold in California” (performed by The Oak Ridge Boys, Steve Gatlin and Rudy Gatlin).
“I am humbled and honored to be a member of the Nashville Songwriters Hall of Fame,” says Gatlin. “Having family and friends there with me was a blessing. Things happen in God’s time and mostly fair winds have blown over me.”
Gatlin was inducted alongside Sharon Vaughn in the Veteran Songwriter category, Marcus Hummon, Kostas Lazarides and Rivers Rutherford in the Songwriter category, and Dwight Yoakam in the Songwriter/Artist category.
During his own acceptance speech, Yoakam praised Gatlin’s songwriting. “It’s an honor for me to be in this class tonight with everybody but especially, as a fellow performer, being inducted with Larry Gatlin,” said Yoakam. “I think he stands alone as one of the more eloquent singer-songwriters ever in country music.”
Over the course of his career, Gatlin has written hundreds of songs, including seven No. 1 hits for the Gatlin Brothers: “All the Gold in California,” “Houston (Means I’m One Day Closer to You),” “Broken Lady,” “Statues Without Hearts,” “I Don’t Wanna Cry,” “Night Time Magic,” and “I Just Wish You Were Someone I Love.” His songs have been recorded by many household names including Elvis Presley, Barry Gibb, Glen Campbell, Barbra Streisand, Johnny Cash, Kris Kristofferson, Dottie West, and Roy Orbison. He appears on several “best of” songwriter lists. With 35 songs, he’s currently tied at No. 4 with Tom T. Hall for the most self-penned Top 40 Billboard hits as a country artist. The pair follow Merle Haggard, Marty Robbins, and Hank Williams Jr.

Music editor for Nashville.com. Jerry Holthouse is a content writer, songwriter and a graphic designer. He owns and runs Holthouse Creative, a full service creative agency. He is an avid outdoorsman and a lover of everything music. You can contact him at JerryHolthouse@Nashville.com
Previous President And Mrs. Jimmy Carter Visit Grand Ole Opry
Next Madison Kozak To Make Her Opry Debut