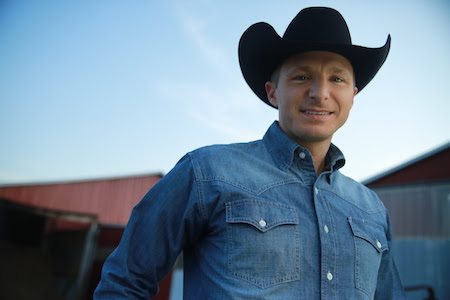 Authentic country and western singer/songwriter and professional roper Paul Bogart has released a music video for his single “All That Cowboy Jazz.” An infectious western swing song that will have listeners on their feet, boot-scootin’ across the floor in seconds, the video will put viewers in a happy mood instantaneously. The song is the first single from Bogart’s latest album Leather available now here.

Country lifestyle entertainment channel, Great American Country (GAC), The Country Network and The Heartland Network have picked up the video for “All That Cowboy Jazz” to include in their rotation. This is the follow-up to his majorly successful video release of “Cowboy Way”, a tribute to real-life cowboys garnering over 1 million views and showcased by the American Quarter Horse Association and other equine organizations across country.

“’All That Cowboy Jazz’ is a perfect fit for Heartland’s video library.  Paul Bogart’s new spin on the classic sound is breathtakingly authentic.  Adding the video into our rotation was the easiest decision I’ve made all year.” expressed Terri Coyle of The Heartland Network.

“I wrote ‘All That Cowboy Jazz’ with two good friends and it’s definitely one of my favorites on the album. We shot the music video back home in Oologah, OK and the hometown crowd filled up the Iron Horse Saloon — partly in support of me and my music and I’m sure partly just to see how a Nashville music video comes about! The song is a toe tapper and the video brings a smile every time!” said Paul Bogart.

About Paul Bogart
Though his songs are fresh and he himself is young, he is an old soul with a knack for capturing time-honored traditions and summing up classic sentiments in catchy, three-minute songs. Exuding sincerity and a rare, down-to-earth charm, Paul Bogart is, simply put, the epitome of traditional country music. After nearly a decade of writing, playing and touring, Bogart has begun pulling in big numbers in every arena, literally. Whether it’s the main stage at the AQHA World Championships with thousands in attendance or the social media scene with almost 4 million fans reached through his YouTube tribute, “Cowboy Ride,” Bogart’s songs have connected with America’s Heartland in a real, tangible way that modern country has perhaps missed.