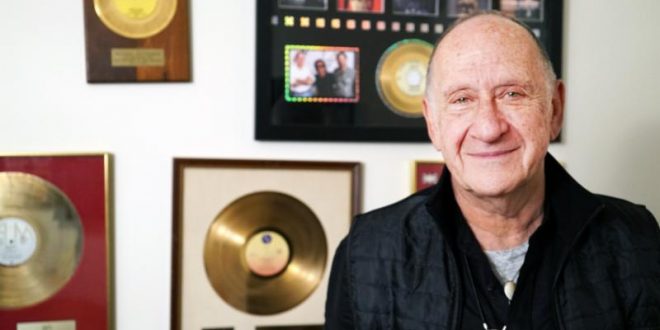 Richard Gottehrer courtesy of The Orchard

The Music Business Association (Music Biz) has announced Richard Gottehrer, co-founder of independent distributor The Orchard, as the recipient of its 2019 Outstanding Achievement Award. Gottehrer will receive the Award at the Music Biz 2019 Conference’s Awards & Hall of Fame Dinner on Tuesday, May 7th at the JW Marriott Nashville. He will also present a keynote address during the Independent Artist & Songwriter Forum, powered by Songtrust.

Gottehrer is an industry innovator who has left his mark on virtually all areas of the music world as an esteemed songwriter, producer, performer, entrepreneur, and executive. His influence on the industry began in the 1960s, the decade in which he penned the iconic “My Boyfriend’s Back” and produced the hit “Hang on Sloopy.” As part of The Strangeloves, he brought the world the classic track “I Want Candy.”

In the late 60s, Gottehrer, with Seymour Stein co-founded Sire Records – the company that would rocket the Ramones, the Talking Heads and Madonna to stardom. After leaving Sire, he worked with Blondie, Richard Hell and other acts in the CBGB Punk scene. Gottehrer also produced The Go-Go’s, putting his signature polish on their stratospheric chart-topper Beauty and the Beat. He continued writing during this time, penning songs for David Bowie, The J. Geils Band, and Jerry Lee Lewis.

In the 1990s, Gottehrer, alongside partner Scott Cohen visualized a digital distribution platform that would harness the latest technology to empower up-and-coming artists in the independent music community. The Orchard was founded in 1997 out of this vision to give indie artists, in Gottehrer’s words, “A Place to Grow.”

From the beginning, artists who signed with The Orchard agreed to let the company store, deliver, and supply their music digitally. At the time – four years before the iTunes store would see the light of day – this business strategy was pioneering and highly unusual. As the digital revolution became embraced by the music industry, The Orchard expanded beyond music into digital distribution of film and video. Today, it is the world’s largest indie music distributor, which works with artists including Jason Isbell, G Herbo, Ozuna, John Prine, Kelsea Ballerini and Jorja Smith.

Gottehrer fits neatly into the mold established by the Music Biz Outstanding Achievement Award. It celebrates industry figures and projects that have reached an intangible level of success, becoming touchstones by which their peers are measured. This Award has been given to a vast array of recipients, ranging from creators and musicians setting new industry standards to legacy artists whose sustained influence continually shapes the music business.

“As Music Biz’s goal is to promote growth across all facets of the music business, it is important for us to recognize Richard as a one-of-a-kind individual who has greatly impacted so many areas of the industry,” commented Music Business Association President James Donio. “Those in attendance at the Forum can expect a wealth of perspective and experience offered by a truly irreplaceable creator, executive and visionary.”

Previous recipients of the Outstanding Achievement Award include the record-breaking hit “Despacito” by Luis Fonsi featuring Daddy Yankee; the groundbreaking Hamilton Original Cast Recording and Hamilton Mixtape; The Who and The Monkees to commemorate their 50th anniversaries; the Frozen soundtrack for its meteoric success; and Gamble & Huff, Leiber & Stoller, and Ashford & Simpson – all of whom won for their achievements in musical collaboration.

In addition to receiving the award, Gottehrer will deliver a keynote address on Monday, May 6th at the Independent Artist & Songwriter Forum, powered by Songtrust. Now in its third year, this program showcases the influence of independent artists and songwriters within our industry as creatives are taking control of their careers and embracing new business models. This program is designed to introduce artists and songwriters to new tools to help them earn a sustainable income in today’s music business. The program is again powered by Songtrust, an easy to use solution that helps songwriters, artists, managers, labels and publishers simplify music rights management including the administration of music publishing assets, performing rights, and digital licensing.

Music Biz 2019 will return to Nashville May 5-8 at the elegant JW Marriott in the heart of downtown Nashville. The music industry’s premier event, Music Biz offers a platform for the commerce, content, and creative sectors to network, get on the cutting edge of the latest trends, and meet with trading partners. Announced thus far, Bebe Rexha and Kane Brown will receive Breakthrough Artist Awards, Sony Music Nashville Chairman and CEO Randy Goodman will receive the Presidential Award for Outstanding Executive Achievement and Record Archive owners Richard Storms and Alayna Alderman will accept the Independent Spirit Award. The dinner event is sponsored by BuzzAngle Music, City National Bank, Jammber and TiVo. More program and awards announcements will be made in the coming weeks. For the most up-to-date conference information, visit musicbiz2019.com. To register for the 2019 event, go to musicbiz2019.eventbrite.com. Early bird rates are available through March 22, 2019.

Music editor for Nashville.com. Jerry Holthouse is a content writer, songwriter and a graphic designer. He owns and runs Holthouse Creative, a full service creative agency. He is an avid outdoorsman and a lover of everything music. You can contact him at JerryHolthouse@Nashville.com
Previous John Berry Shares Positive Message Following Health Setback
Next Tim McGraw Opens Boutique Gym, Trumav Fitness