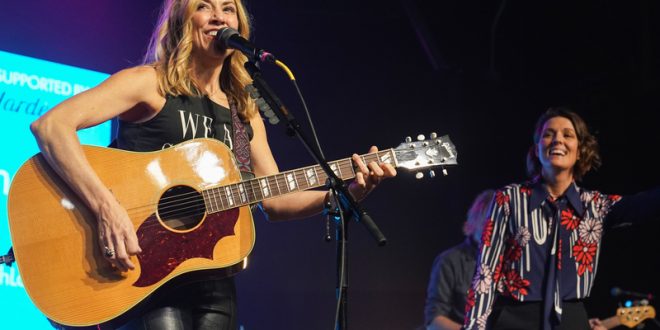 Marathon Music Works hosted last night’s incredible To Nashville, With Love, a sold out charity benefit concert, which has raised money for the people of Nashville, whose homes and lives were devastated by the recent March 2020 tornado. Raising an estimated $500,000 in ticket sales, sponsorship, donations and funds to be raised from auction items including signed guitars from all performers. Every dollar raised was donated To Nashville, With Love Fund, to be allocated to both disaster relief and mental health organizations.

The concert, which was organized by a group of industry professionals, also featured a performance from members of The Highwomen including, Brandi Carlile, Sheryl Crow, Natalie Henby and Yola and a superjam performance with all of the artists gathered on stage covering, Neil Young’s hit song “Rockin’ In The Free World.”

Yola also performed “Stand By My Girl” with Dan Auerbach, “It Ain’t Easier” and “You’re All I Need To Get By”. Discussing the song with The Tennessean, Yola stated, “I thought that it was a really wonderful sentiment that needed to be said. You’re what I need. It’s the community that we need. It’s the people that we need. It’s our relationships.”

WRLT-Lightning 100 was the event broadcast partner and the entire event was broadcasted via the website on lightning100.com & 100.1 FM. A watch party took place at Yee-Haw Brewing Company.

Ellen Lehman, president of The Community Foundation of Middle Tennessee, an organization benefiting from the fund, stated, “We know when disasters strike, there are no quick fixes. We are grateful to our partners from the entertainment industry for their tireless work in making these special events a reality. Thanks to these efforts through the work of nonprofits on the ground helping victims address their needs, we will be able to better respond to the damage caused by these disastrous storms.”

The To Nashville, With Love Fund was created by a group of music industry professionals to help raise vital funds after the devastating March 2020 tornadoes that struck Middle Tennessee. Funds raised will be dispersed between organizations helping with disaster relief and mental health after tragedy. All donations to this fund will be administered by The Community Foundation of Middle Tennessee. The Founding Board of Advisors includes: Charlie Pierce, Doug Hall, Jay Williams, Jonathan Insogna, Marissa Smith and Tom Osborn.

On behalf of the fund, Charlie Pierce, stated, “Myself, Marissa, Jonathan, Doug and Tom and the rest of the team would like to send our love and thanks to the people of Nashville, who donated their time, money and love to their neighbors who deeply needed it at time of great crisis. We will regroup and distribute the funds as soon as humanly possible as many are in critical need. I don’t believe there is any other city in the world where this would be possible. We were devastated to see the destruction following the tornadoes last week across the greater Nashville and middle Tennessee region. What the community has achieved is astonishing. When we called, everybody answered and said yes! Our greatest thanks to all of the artists, sponsors and partners for this event – but most of all to every single person who bought a ticket or donated.”

Music editor for Nashville.com. Jerry Holthouse is a content writer, songwriter and a graphic designer. He owns and runs Holthouse Creative, a full service creative agency. He is an avid outdoorsman and a lover of everything music. You can contact him at JerryHolthouse@Nashville.com
Previous Trace Adkins Signs With Verge Records
Next WATCH: Jimmie Allen’s “This Is Us” featuring Noah Cyrus