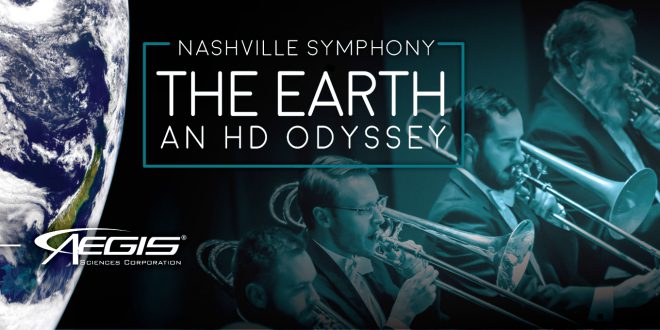 Nashville Symphony Kicks Off 2018 with ‘The Earth: An HD Odyssey’

The Nashville Symphony’s Aegis Sciences Classical Series resumes on January 12-13 at Schermerhorn Symphony Center, as Music Director Giancarlo Guerrero and the orchestra take audiences on a spectacular musical and visual journey during “The Earth: An HD Odyssey.”

The second installment of the HD Odyssey series, the unique program will feature high-definition footage of space shuttle launches and images of Earth captured by NASA on a massive screen above the stage, while the orchestra performs John Adams’ Short Ride in a Fast Machine andRichard Strauss’ Also sprach Zarathustra. Argentine pianist Ingrid Fliter opens the performances as the featured soloist on Frédéric Chopin’s First Piano Concerto.

Tickets are still available for both performances and are selling quickly. Date night packages – which include two tickets, two glasses of wine and Goo chocolates – are available, and all January 12 ticket purchases include admittance to Happy Hour at the ’Horn, a pre-concert event featuring live music, discounts on select wine and beers, prize giveaways and more.  You can also purchase tickets HERE!

A tone poem based on Friedrich Nietzsche’s philosophical work of the same name, Strauss’ Also sprach Zarathustra begins with a dramatic trumpet passage made famous in Stanley Kubrick’s iconic 2001: A Space Odyssey, as well as a number of other films. In the eight sections that follow, Strauss builds on Nietzsche’s concept of a fictional but historically-based prophet named Zarathustra and his message of human self-reliance. With its enormous orchestration, the epic piece showcases the composer’s mastery at creating an instrumental surround-soundscape.

John Adams’ strong ties to Minimalism are readily apparent in Short Ride in a Fast Machine, a distinctive variation on the traditional concert fanfare that was inspired by a harrowing ride the composer once took in a relative’s Ferrari. Though only four minutes long, the dizzying and almost frantic piece is full of orchestral color, with the woodblock and clarinet providing a driving beat throughout.

Ingrid Fliter, who made her professional orchestral debut when she was 16 years old, is one of only a handful of pianists to receive the prestigious Gilmore Artist Award. Active as both a soloist and recitalist, Fliter has performed with orchestras around the globe, and is widely considered one of the world’s preeminent interpreters of Chopin.

Tickets for The Earth: An HD Odyssey may be purchased:

More information and full program notes can be found at: https://www.nashvillesymphony.org/earth.

The GRAMMY® Award-winning Nashville Symphony has earned an international reputation for its innovative programming and its commitment to performing, recording and commissioning works by America’s leading composers. The Nashville Symphony has released 28 recordings on Naxos, which have received 24 GRAMMY® nominations and 11 GRAMMY® Awards, making it one of the most active recording orchestras in the country. The orchestra has also released recordings on Decca, Deutsche Grammophon and New West Records, among other labels. With more than 140 performances annually, the orchestra offers a broad range of classical, pops and jazz, and children’s concerts, while its extensive education and community engagement programs reach 60,000 children and adults each year.