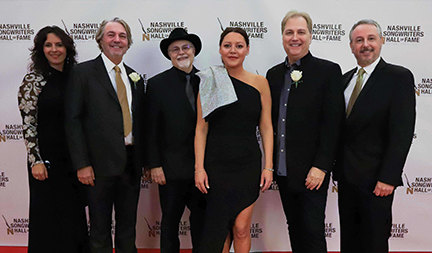 The Nashville Songwriters Hall of Fame (NaSHOF) welcomed six new members into its ranks last night as the Class of 2022 was officially honored at the organization’s 52nd Anniversary Gala. The musical contributions of the newest inductees were celebrated through star-studded performances of some of their biggest songs for the capacity crowd at Nashville’s Music City Center.

“Tonight we are celebrating the legacies of six extraordinary songwriters and bestowing upon them one of the nation’s highest songwriting honors — induction into the Nashville Songwriters Hall of Fame,” said Sarah Cates, Board Chair of the Nashville Songwriters Hall of Fame Foundation. “I always look forward to this evening when the industry can gather to share in this moment with our inductees, their families and friends. And I’m not alone in anticipating this event. This year, we have one of our largest audiences ever, all here to applaud these exemplary songwriters.”

The event traditionally features some of music’s most talented artists performing songs from the inductees’ impressive catalogs, and this year’s line-up was no exception.

Award-winning artists The Isaacs kicked off the evening by honoring inductee Shania Twain with a medley of her song-of-the-year hits “Forever And For Always” and “You’re Still The One.” Though Twain was unable to attend, she did send a video thanking NaSHOF for the honor, noting that songwriting had gotten her through many hard times and had been her saving grace. NaSHOF 2019 inductee Sharon Vaughn presented Twain and also spoke on her behalf.

NaSHOF 2021 inductee Rhett Akins then took the stage to honor David Malloy. Akins reprised his own 1998 recording of “Drivin’ My Life Away,” originally popularized by Eddie Rabbitt. NaSHOF 2015 inductee and longtime co-writer Even Stevens presented Malloy.

The evening also featured a medley of “Coal Miner’s Daughter and “If My Heart Had Windows” performed by award-winning songwriters Jessi Alexander and Jon Randall in a special memorial tribute to recently deceased NaSHOF inductees Loretta Lynn (inducted in 1983) and Dallas Frazier (inducted in 1976).

The gala, which kicked off with a welcoming performance from the band Troubadour Blue, featured its long-time “voice” — iconic announcer Bill Cody, the Country Music Disc Jockey Hall of Famer and host of 650 AM WSM’s “Coffee, Country & Cody.”

Music editor for Nashville.com. Jerry Holthouse is a content writer, songwriter and a graphic designer. He owns and runs Holthouse Creative, a full service creative agency. He is an avid outdoorsman and a lover of everything music. You can contact him at JerryHolthouse@Nashville.com
Previous Stars And Fans Celebrate The Life Of Loretta Lynn
Next Brad Warren Launches Podcast On Loss, Healing & Faith