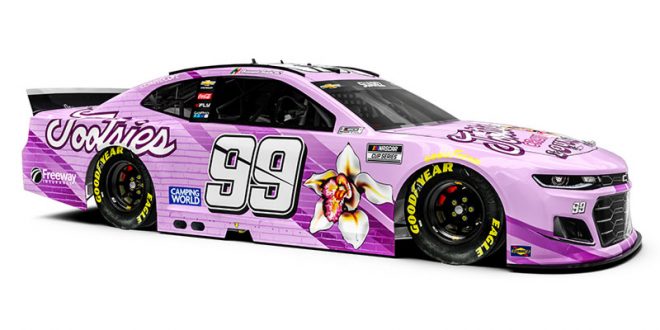 Tootsie’s Orchid Lounge, the purple cornerstone honky-tonk in the heart of Music City’s Lower Broadway entertainment district, will sponsor Trackhouse Racing’s No. 99 Chevrolet Camaro and driver Daniel Suarez in the June 20 NASCAR Cup Series race at Nashville Superspeedway. The event is the first NASCAR Cup series race in the region in 37 years.

Trackhouse Entertainment Group founder Justin Marks said he chose Nashville as the headquarters for his burgeoning sports and entertainment enterprise to marry the cultures of music and motorsports. He called it an honor to represent a country music institution that is world famous for launching hundreds of musician’s careers.

“Nothing is more quintessential Nashville than Tootsie’s,” said Marks, whose Trackhouse Entertainment Group is established in Franklin, Tenn., 20 minutes from Lower Broadway.

“When I saw Nashville on the Cup Series schedule last year, my first thought was to find a way to represent this amazing city in a big way. It is very important to me that Trackhouse become a recognized part of the Nashville community, as a professional sports team, as good citizens, and as vocal ambassadors for the region.

“I met with Tootsie’s owner Steve Smith and shared our vision. Immediately he was in, and we all agreed we needed to celebrate the return of NASCAR to this region in an impactful way. This is a partnership that will become a part of the Nashville racing landscape for years to come.”

Smith said he believes NASCAR fans and Tootsie’s are a perfect match.

“We love a big party and having NASCAR in Nashville is worth celebrating,” said Smith, who owns multiple Lower Broadway bars. “Country music fans and racing fans are one and the same. We are very excited to host these passionate fans and be a part of such a historic event.”

Suárez, 29, of Monterrey, Mexico native notably stands out as the only foreign-born national series champion in NASCAR history with his 2016 Xfinity Series title. With the first-year Trackhouse team, Suárez has posted two top-10s and led 74 laps in 2021.

“I know much more about country music in Mexico than I do about country music in the United States, but my crew chief, Travis Mack and I are going to Nashville early in the week to experience Tootsie’s for ourselves,” said Suárez whose driver uniform will incorporate Tootsie’s logos along with cowboy boots in the design.“Tootsie’s has meant so much to so many young artists and I am so very thankful Tootsie’s is supporting our young team, as well.”

Tootsie’s has operated across the alley from the Ryman Auditorium (The original Grand Old Opry) almost continuously since 1960. Its proprietor from 1960 to 1978, Hattie Louise “Tootsie” Bess, bought the lounge called “Mom’s” and named it for herself.

According to tradition, a painter mistakenly painted the exterior orchid purple. The color was never changed and became Tootsie’s signature color. Over the years, she served such famous customers as Kris Kristofferson, Faron Young, and Willie Nelson when they were still up-and-coming artists, and Tootsie was well-known for her generosity toward struggling musicians. The photo- and memorabilia-lined walls are called “Tootsie’s Wall of Fame.” A portion of the Loretta Lynn biopic “Coal Miner’s Daughter” was filmed inside Tootsie’s.

A music connection is not new to the Trackhouse racing team. In January, Marks announced GRAMMY Award-winning global superstar Armando Christian Perez (Pitbull) as a team co-owner. Perez, who has attended several Cup races in 2021 expects to be on the team’s pit box during the race at Nashville Speedway.

The Nashville race will kick off NBC’s portion of the schedule. NBCSN will broadcast the race at 3:30 p.m. ET.

Music editor for Nashville.com. Jerry Holthouse is a content writer, songwriter and a graphic designer. He owns and runs Holthouse Creative, a full service creative agency. He is an avid outdoorsman and a lover of everything music. You can contact him at JerryHolthouse@Nashville.com
Previous Heartless Bastards Release First New Music In 5 Years
Next Enter To Win Doditty’s Virtual Reality Sweepstakes