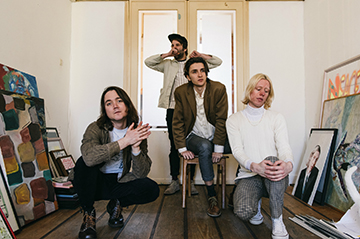 Mozes And The Firstborn At The Basement, Feb. 18th

Dutch quartet Mozes and the Firstborn, who will release their new album Dadcore, Jan. 25 on Burger Records is performing at The Basement, Feb. 18th on their U.S. tour. The band premiered a new single, “Blow Up”, Friday via  TIDAL prior to its release this coming Friday.
Mozes and the Firstborn spent the past year writing new material, recording in the U.S. and Netherlands with producer/mixer Chris Coady (Beach House, Slowdive) and Roland Cosio (together PANGEA, Fuzz), hitting SXSW and touring the states supporting Bodega.  The result…  Dadcore embraces the feel of a mixtape, as Mozes blend their favorite styles and genres into an intriguing collection of songs, including prior 2018 single, “ Sad Supermarket Song”, which already has nearly 400k plays on Spotify.

Playing a potent mix of sleazy grunge and power pop perfection Mozes and the Firstborn hail from Eindhoven, The Netherlands. The band started out in 2010 with Melle Dielesen on vocals, guitar, Corto Blommaert on bass and Raven Aartsen on drums, with Ernst-Jan van Doorn joining prior to their 2011 debut EP  I Got Skills.  California label Burger Records signed the band to release their self-titled debut full-length in 2014, followed by  Great Pile Of Nothing in 2016, touring internationally in support, with like-minded artists such as The Growlers, Unknown Mortal Orchestra and Together Pangea, while garnering features on NPR’s Weekend Edition, Pitchfork, Noisey, SPIN, CLASH, amongst others. Hopefully we’ll see these guys at Bonnaroo in 2020, they’d be a perfect fit.

Music editor for Nashville.com. Jerry Holthouse is a content writer, songwriter and a graphic designer. He owns and runs Holthouse Creative, a full service creative agency. He is an avid outdoorsman and a lover of everything music. You can contact him at JerryHolthouse@Nashville.com
Previous Tracy Byrd Celebrates 25 Years of Making Music, Announces 2019 Tour Plans
Next Abigail Dowd Premiere’s First Single From “Not What I Seem”