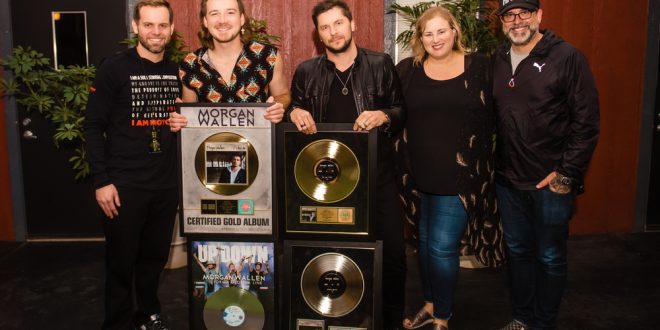 Big Loud Records breakout star Morgan Wallen  celebrated more than the end of his summer-long run with Florida Georgia Line this weekend (9/28), taking home an armful of RIAA-certified hardware at the final stop of the Can’t Say I Ain’t Country Tour in Irvine, CA.

The CMA New Artist of the Year nominee was surprised with four record plaques, commemorating newly-certified gold debut single “The Way I Talk,” platinum #1 “Up Down” featuring FGL, platinum chart-dominating multi-week #1 “Whiskey Glasses,” and gold debut album If I Know Me, where all three singles are housed.

“I remember getting my first plaque for ‘Up Down’ — that meant so much to me. I started to see the difference at my shows after that in the way people were reacting, the same way I saw it happening when my fans latched on to ‘Whiskey Glasses’ this year,” shares Wallen. “Now seeing the same correlation — having a GOLD album and watching fans at shows singing along all night and buying in to my music — it is indescribable. Thank you to my team, to Country radio and to the fans that helped make this happen for me.”

Building momentum as one of the new faces in Country, Wallen saw his streaming numbers surpass 1 billion this year, aided by highly-praised Jason Isbell cover, “Cover Me Up,” HIXTAPE VOL. 1 HARDY collabs “He Went To Jared” and “Turn You Down,” and “Heartless.”

Music editor for Nashville.com. Jerry Holthouse is a content writer, songwriter and a graphic designer. He owns and runs Holthouse Creative, a full service creative agency. He is an avid outdoorsman and a lover of everything music. You can contact him at JerryHolthouse@Nashville.com
Previous Cody Jinks Announces Two New Albums
Next Watch: Cole Swindell Premieres “Right Where I Left It”