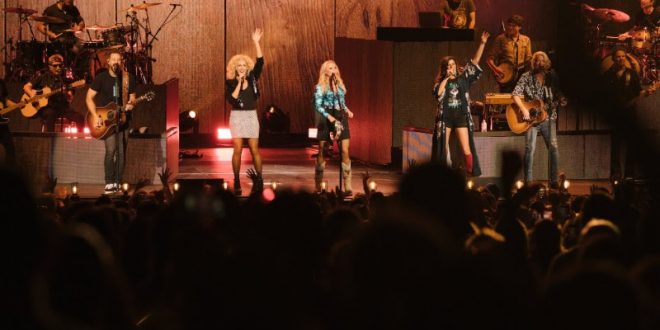 For songwriters, an idea for a song may be nothing more than a notion — a scribble on a notepad for years before the timing, message and hook come together. So, it’s not surprising that Country superstars Miranda Lambert and Little Big Town dreamt about a co-headlining tour for years before finally pulling the trigger on their 17-city The Bandwagon Tour.

Saturday’s show at Hollywood Casino Amphitheatre in Chicago marked the tour’s final destination, but not before giving fans one last night of high-energy hits and powerful collaborations unique to the show.

The troupe traversed across the Northeast, Southeast and Midwest regions, playing to at-capacity crowds almost every night and treating them to a once-in-a-lifetime performance of some of the group’s greatest hits—including an hour-long encore that CMT described as feeling “as perfected as it did spontaneous.”

Opening for the quintet was Sony recording artist and country newcomer Tenille Townes, and other special guests included Natalie Hemby, The Steel Woods and Turnpike Troubadours.

Both critically acclaimed artists, Lambert and Little Big Town combine for a total of thirty-six ACM Award wins, twenty-one CMA Award wins and four GRAMMYs. Lambert, who made ACM history when she was named the ACM Female Vocalist of the Year for the ninth consecutive year, was recently announced as the Country Music Hall of Fame ® and Museum’s 15th artist-in-residence and is preparing for the release this fall of her third project with fellow Pistol Annies Angaleena Presley and Ashley Monroe.

Music editor for Nashville.com. Jerry Holthouse is a content writer, songwriter and a graphic designer. He owns and runs Holthouse Creative, a full service creative agency. He is an avid outdoorsman and a lover of everything music. You can contact him at JerryHolthouse@Nashville.com
Previous Carrie Underwood Returns To American Idol
Next Scotty McCreery Hits Number One On The Beach Music Chart