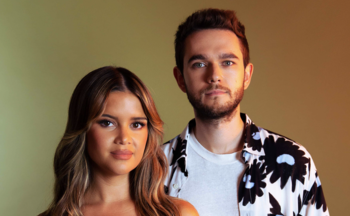 Maren Morris And Producer Zedd Reunite For “Make You Say”

Today, Grammy-winning Maren Morris and producer Zedd reunite on a new collaboration, “Make You Say,” featuring production duo BEAUZ and co-written by Zedd, Maren, BEAUZ, Charlie Puth and Jacob Kasher Hindlin. Watch and listen above. The new track follows the duo’s six times Platinum-certified hit collaboration from 2018, “The Middle,” which has accumulated more than four billion streams worldwide.
“I loved working with Zedd again on ‘Make You Say’ after such a thrill ride with ‘The Middle,’” Maren says. “It’s such a vibey melody and making the music video was definitely a first for me as far as choreography and animation go. The fans are gonna flip.”

“I started working on this record with Beauz about three or four years ago,” Zedd says. “We went back and forth slowly, refining the production over the years, and then Charlie and I got in the studio and wrote the topline for the track. Maren recorded a demo of it and sounded phenomenal, so I met her in Nashville, and we recorded the final vocal to ‘Make You Say’ and she took the song to a whole new level. ‘Make You Say’ is the kickoff of a new chapter for me and I can’t wait for the world to hear it.”

In addition, the music video premieres today as part of Apple’s “Made on iPad” campaign. The “Made On iPad” campaign highlights how iPad’s powerful performance, versatility and portability has provided inspiration to creators all over the world. Apple Pencil seamlessly works with iPad and powerful apps to make iPad the ultimate tool. Using the video animation app FlipaClip, the rotoscoping technique is shown in the video for “Make You Say” to showcase the level of creativity that can be achieved with iPad.

Music editor for Nashville.com. Jerry Holthouse is a content writer, songwriter and a graphic designer. He owns and runs Holthouse Creative, a full service creative agency. He is an avid outdoorsman and a lover of everything music. You can contact him at JerryHolthouse@Nashville.com
Previous WATCH: JD Shelburne’s “The Road I Grew Up On”
Next Chris Young & Mitchell Tenpenny Top The Charts