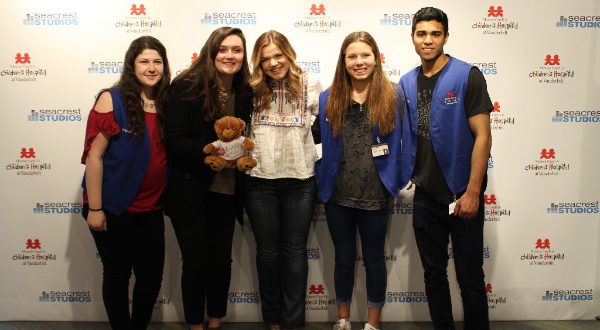 Martin started Macy’s Toy Box at age seven, faced with the dilemma of needing to part ways with some of her most cherished belongings: her toys. Rather than hold a garage sale, Martin told her parents that they needed to find their way to the hands of a child in need who would truly appreciate them. Thus, Macy’s Toy Box began, donating new and gently used toys to local law enforcement and underprivileged children in her hometown of College Station, TX. After a short while, the cause outgrew Texas and spread throughout the country to later benefit St. Jude Children’s Research Hospital, The Make-A-Wish Foundation, Nashville’s Bridge Ministries and numerous children’s hospitals.

In addition to growing her non-profit, the 20-year-old Texan has also been hard at work focusing on her other passion: music. Martin is scheduled to perform her current single, “Take It Now” – dubbed by Her Campus as “the perfect addition to your road trip Spotify playlist” – on Hallmark Channel’s Home & Family on April 20.  Martin is gearing up to release new music in the coming months.

Music editor for Nashville.com. Jerry Holthouse is a content writer, songwriter and a graphic designer. He owns and runs Holthouse Creative, a full service creative agency. He is an avid outdoorsman and a lover of everything music. You can contact him at JerryHolthouse@Nashville.com
Previous Cowboy Mouth Returns To The Exit/In
Next BlackHawk, The Outlaws Raise $40,000 For Two Worthy Organizations