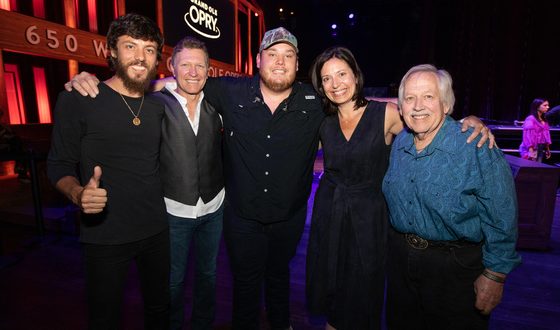 As Combs wrapped his No. 1 hit “She Got The Best Of Me,” Conlee, Janson, and Morgan took the stage for the coveted invitation. “What a career this guy is having,” Conlee began. Turning to Combs, he added, “The Grand Ole Opry wants you to know we just love you.”

Janson and Morgan took it from there, asking in unison to a visibly moved Combs, “How would you like to be the next member of the Grand Ole Opry?!” After a round of congratulations from his three will-be fellow Opry members, Combs offered, “Holy cow! Are you serious? ‘Cause if you’re not serious, that’s really mean.” Combs’ official Opry induction will be set for later this year.

“Since making his Opry debut a little less than three years ago, Luke has become a favorite of fans and fellow artists here at the Opry while simultaneously becoming a chart-topping bona fide country music superstar,” said Opry General Manager Sally Williams. We’ve loved every minute of his Opry visits and are thrilled to invite him to become an official part of the Opry family. Luke’s heart is filled with love and genuine appreciation for the Opry, and we are excited this will be his musical home throughout what will no doubt be a long and rewarding career full of great music.”

Music editor for Nashville.com. Jerry Holthouse is a content writer, songwriter and a graphic designer. He owns and runs Holthouse Creative, a full service creative agency. He is an avid outdoorsman and a lover of everything music. You can contact him at JerryHolthouse@Nashville.com
Previous The 48th Annual CMA Fest is in the Books
Next Ryman Auditorium Announces Plans For Icon Walk