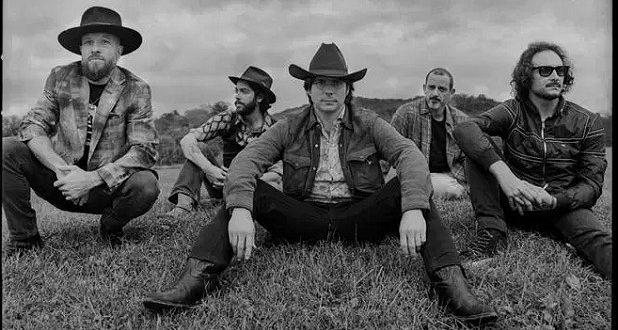 Lukas Nelson & Promise of the Real’s “Perennial Bloom (Back To You)” is #1 this week on the Americana Singles chart (listen/share HERE). The single is from the band’s acclaimed new album, A Few Stars Apart, which also remains at #1 on the Americana Albums chart for the 7th week.

Out now via Fantasy Records (stream/purchase here), A Few Stars Apart was produced by Grammy Award winning producer Dave Cobb and is a testament to finding a human connection: between close family and friends, as well as one’s own heart. The album was inspired by the stillness Nelson found while riding out the beginning of the pandemic with his family in Texas and was recorded with the full band live on eight-track tape over three weeks at Nashville’s historic RCA Studio A. Across the record’s eleven new songs, Nelson reveals what it means to come home again, to be still, and to find community—and yourself.

“I’m from what one might say is the ultimate road family—I’ve been on the road my entire life,” shares Nelson. “I’ve never been anywhere longer than three months, and suddenly here we are, the four of us together. And thank god we were together. I can’t remember the last time we had that much time together as a family. We had a lot of really important bonding that happened during that time. And I have to say, as terrible as the pandemic has been in so many ways, for my inner peace, I was able to take a lot of good from this time. I was able to pause and reflect.”

He continues, “It took me a really long time to come back to the home in my heart. In a physical sense, that’s Texas and Hawaii. But in a spiritual sense as well—I think I finally decided not to run from who I am and who I am destined to be. First and foremost, that’s a songwriter. That’s what this record means to me. There’s a story being told through the whole record. A story about connection and coming home.”
Based in Texas, Promise of the Real is: Lukas Nelson (lead vocals, electric guitar, acoustic guitar, piano), Anthony LoGerfo (drums, percussion, tambourine), Corey McCormick (bass guitar, upright bass, Mellotron, vocals), Tato Melgar (percussion) and Logan Metz (piano, Wurlitzer, B3 organ, lap steel, banjo, Mellotron, vocals). Since their debut over a decade ago, the acclaimed band have toured relentlessly playing countless sold-out one-night shows and festivals around the world and occasionally serving as Neil Young’s road band. Nelson also co-produced the music for 2018’s lauded A Star Is Born film in addition to appearing in the film with the band and went on to win a BAFTA Award for Best Original Music and a GRAMMY Award for Best Compilation Soundtrack for Visual Media for his work.

Music editor for Nashville.com. Jerry Holthouse is a content writer, songwriter and a graphic designer. He owns and runs Holthouse Creative, a full service creative agency. He is an avid outdoorsman and a lover of everything music. You can contact him at JerryHolthouse@Nashville.com
Previous The Isaacs Invited To Join The Grand Ole Opry
Next American Idol Searching For Talent In Tennessee August 18