Award-winning bluegrass favorites Lorraine Jordan & Carolina Road are gearing up for the release of their upcoming album, True Grass Again. The project includes 11 songs, all staying true to the band’s one-of-a-kind style, with a traditional touch. True Grass Again will be released August 10 via Pinecastle Records, and fans can pre-order the album now at carolinaroadband.com.

“I’m so excited to go back to our roots on this cd – featuring some driving true grass songs,” says Lorraine Jordan. “I’m so proud to be the band that was given the opportunity to record a song that is sure to be popular with the fans. Bringing together, and singing the harmony with four of the strongest lead singers in Blue Grass is another highlight of my career.”

The upcoming album marks Lorraine Jordan & Carolina Road’s first release in nearly 3 years, and the chart-toppers are excited to return to their traditional bluegrass roots. There are several highlights on True Grass Again, including the touching Lorraine Jordan-written, “Another Soldier,” which details a fallen warrior giving the ultimate sacrifice. Other standout moments include “Poor Monroe,” featuring twin fiddles, along with new band member Randy Graham, known for being part of renowned vocal bands like The Bluegrass Cardinals and Doyle Lawson & Quicksilver in the past. Lorraine tells the story of Bill Monroe’s Uncle Pen and Uncle Jasper in “Run Little Fox,” a tune that fans have been requesting for years. The new, re-imagined version features extraordinary fiddle and banjo styles from veteran musicians Ben Greene and Josh Goforth. Finally, the track “I Don’t Want to Lose You” is another solid recording (also penned by Jordan), including world-class vocals and instrumentals showcasing the band’s skills.

Fans got a first taste of True Grass Again earlier this year, when the group released the lead single, “True Grass.” Joined by fellow bluegrassers Junior Sisk and Danny Paisley, the song continues its upward climb on the charts. 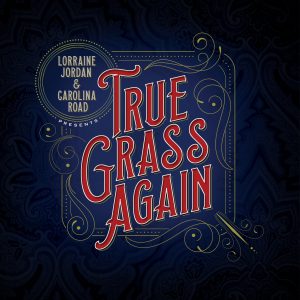 Music editor for Nashville.com. Jerry Holthouse is a content writer, songwriter and a graphic designer. He owns and runs Holthouse Creative, a full service creative agency. He is an avid outdoorsman and a lover of everything music. You can contact him at JerryHolthouse@Nashville.com
Previous Kenny Chesney Continues To Help Hurricane Ravaged Virgin Islands
Next Gretchen Wilson Set For “Workin’ Women” Tour