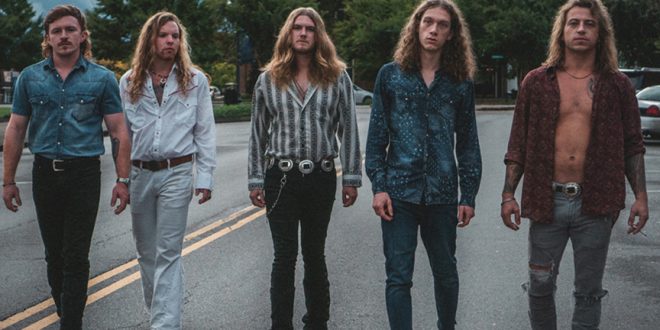 There seems to have been a shortage of true Southern rock bands this last decade. There are quite a few country acts that lean strongly in that direction but as far as that hard-core outlaw, genuine Souther rock sound goes there’s just not a lot out there. If you’re missing that like I am you need to check out Revelry. They play hard, work hard an they are pure Southern rock.

Revelry was founded in 2019 after the band met at a local show in their hometown of Murfreesboro, Tennessee. There to see their future guitarist Redd Byrdd Howell’s band The Redd Byrdd Project, lead singer Zack Montgomery, guitarist J Whorley, and bassist Dane Lovvorn began to get acquainted. After the show, J introduced the guys to Redd Byrdd, and they all started jamming. After adding drummer Lucas Vincent and Revelry was born. Redd Byrdd and J grew up together, and have been best friends since they were 10-years-old. The two grew up learning guitar to the masterful chops of Lynyrd Skynyrd as evidenced through their style. Redd’s greatest idol was Allen Collins, and J’s was Gary Rossington. Ever since, the two have remained inseparable.

Part of Revelry’s sound is based upon the unique perspective that Zack Montgomery brings to the table. Raised by a gigging country musician, Zack grew up around his father’s music, and at one point, he even got an opportunity to play in his dad’s band. Together, they opened up for legendary acts such as David Allan Coe and Molly Hatchet, giving Zack a firsthand experience on what it’s like to play in the big leagues. Zack and Dane would go on to borrow a few musicians from Zack’s fathers band to found Revelry’s predecessor, King & the Rebel.

We’re looking forward to big things from this band and here’s 10 Questions With Revelry:

1. When did the band meet?
We met at a Redd Byrdd show over a bottle of Jack Daniels and some cigs. We started jamming and realized we had something then we became Revelry.

2. Who are the primary songwriters for the band?
Zack writes a lot of the material but we all have contributed to the writing , it usually becomes a group effort by the end of the song.

5. You’re stuck on a desert island, you have one album with you, what is it?
Second Helping

6. Have you ever been star struck when meeting a famous celebrity?
No, always gotta play it cool.

8. What is your most embarrassing live music moment?
When Zack lost 1k$ from the show right after we finished.

9. (Zack) Who is your dream duet partner?
Willie Nelson

10. (Zack) Who is your biggest influence as a lead singer?
Gregg Allman

Music editor for Nashville.com. Jerry Holthouse is a content writer, songwriter and a graphic designer. He owns and runs Holthouse Creative, a full service creative agency. He is an avid outdoorsman and a lover of everything music. You can contact him at JerryHolthouse@Nashville.com
Previous Leftover Salmon Returns To Compass Records
Next Journey Home Project Keeps On Giving