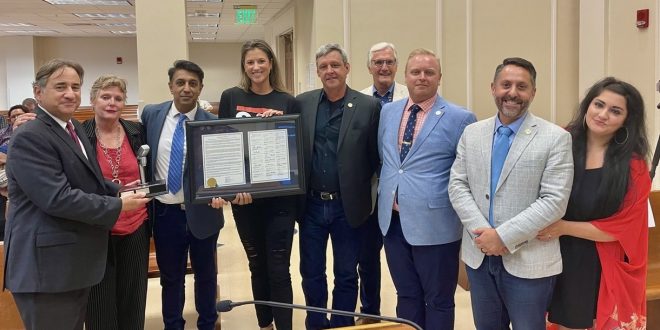 Liverpool, Nashville Connection Gets Even Stronger

Like the passing of the Olympic torch, Dr. Shamender Talwar, FRSA, Co-Founder of TUFF.earth, presented the “Mic of Unity” for The Road to Nashville – Liverpool International Song Contest (TRTN-L) to Nashville Vice Mayor Jim Shulman and the Metro City Council via Council Member Jeff Syracuse. The presentation took place at the Nashville Metro City Council meeting on the evening of July 19, held at the Historic Metro Courthouse. The microphone serves as a symbol of hope and unity between the two music centers. This initiative is giving a voice to not only aspiring talent, but also help to those in need of mental health services via TUFF and its global professional affiliates complimentary mental health counseling services.

The “Mic of Unity” is a 1961 Reslo Ribbon microphone from Liverpool based Cavern Club representing all the great music legends that have played there, including The Beatles, Queen, The Rolling Stones, The Who, and more. The 1961 microphone also holds importance as The Beatles played their first of 292 gigs onstage at the famed venue in February of 1961, soon catapulting them into global fame.

“This does represent, from our point of view, the future of the next generation of songwriters. So, we are delighted to hand this over to Nashville,” says Director Jon Keats at The Cavern Club.

“I hope I don’t drop it! We’ll make sure we keep it in good, safe condition. We’ll protect it. This is quite an honor,” says Nashville Vice Mayor Jim Shulman.

“It is my honor to deliver and pass the baton as a symbol of history to commemorate Liverpool and Nashville’s vast contribution to music while healing the new global pandemic, mental disease.” says Dr. Shamender Talwar, FRSA.

“Since my tenure in the music industry, I’ve seen musicians struggle with a digital revolution and now the pandemic and its impact on their vitality and mental health is becoming more of an issue. This project highlights how we need to support our working creatives in all aspects of their lives. I am most honored to sponsor this important resolution and support this program,” says Council Member Jeff Syracuse.

Music editor for Nashville.com. Jerry Holthouse is a content writer, songwriter and a graphic designer. He owns and runs Holthouse Creative, a full service creative agency. He is an avid outdoorsman and a lover of everything music. You can contact him at JerryHolthouse@Nashville.com
Previous WATCH: Jake Owen’s “1×1”
Next 33 More Acts Announced For Americanafest