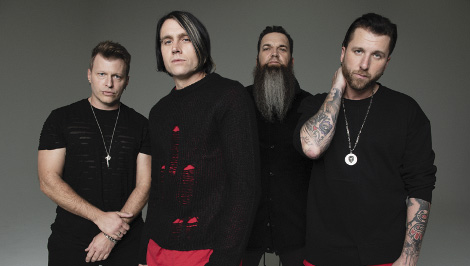 Today, Three Days Grace shared their new music video for “Lifetime” off their forthcoming seventh studio album, EXPLOSIONS. The music video was filmed in the town of Mayfield, KY, which was devastated on December 10th, 2021 when an EF4 tornado tore through Western Kentucky. This hit home for the band, as guitarist Barry Stock lives in the area, and band taped the music video for the song in the town to raise awareness and funds to help them rebuild. Three Days Grace has partnered with PLUS1 so that $1 of every ticket sold for their US tour will go to support tornado recovery efforts in Mayfield, Kentucky. Proceeds will benefit the Mayfield Tornado Relief Fund and Mayfield Independent School District. Watch the music video, directed by Jon Vulpine who also directed the band’s recent “So Called Life” video, above.

The band shared, “Lifetime is about loss. It also speaks to the human condition to push forward and put one foot in front of the other even when you wake up and your world is turned upside down. Barry lives 2 hours to the north of Mayfield and when the tornado struck he not only knew people directly affected but days later found photos and debris in his own backyard; hitting, in more ways than one, close to home. The Mayfield community has shown hope and resilience in the face of unimaginable devastation. When we discussed how we wanted to visually portray this song the story of Mayfield immediately came up. We traveled down to Kentucky from Toronto in March. To see it all with our own eyes and to meet some of the families while overwhelming at times. It was also a reminder to us and hopefully to all of you that while there is suffering there is also hope, resilience, and strength around every corner all over the world.”

Today the band announced their headlining tour of the US and Canadathat includes a stop here in Nashville at Marathon Music Works on 8/6. The band will be joined by special guests Wage War & Zero 9:36 on select U.S. dates and special guests The Warning & The Standstills on select Canadian dates. Tickets for dates and VIP packages will be available here starting Thursday, April 14 at 10am local time for Canadian dates and Friday, April 15 at 10am local time for U.S. shows.

Music editor for Nashville.com. Jerry Holthouse is a content writer, songwriter and a graphic designer. He owns and runs Holthouse Creative, a full service creative agency. He is an avid outdoorsman and a lover of everything music. You can contact him at JerryHolthouse@Nashville.com
Previous WATCH: Porter Howell’s “This Town Was” Hits Home
Next 2022 CMT Award Winners