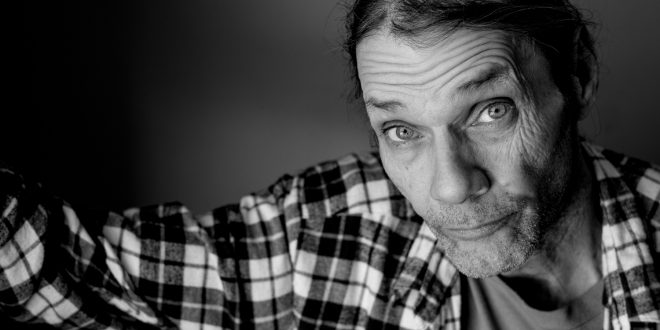 Malcolm Holcombe dropped “Money Train” on streaming sites last Friday and it’s paired with a lyric video created by Emma Swift. The track coincides with the announcement that Malcolm’s next full length album, Tricks of the Trade will be officially released on August 20th. Listen to the song above.

“Money Train” examines the state of the world in a way that only Holcombe’s unique perspective can. Driven by Malcolm’s biting vocals and Jared Tyler’s electric guitar snaking throughout, the song comes to a head with the addition of Mary Gauthier and Jaimee Harris on the chorus.

Produced by the team of Brian Brinkerhoff, Dave Roe and Jared Tyler, Tricks of the Trade finds Malcolm’s trademark growl and strong lyrics surrounded by a great studio band that includes Roe on bass and longtime musical cohort, Tyler on electric guitar, dobro, and background vocals. With Holcombe’s uncanny ability to tap into the collective consciousness of a nation that is currently starving for anything that can latch onto and help soothe its soul. Adding to the depth and beauty of the album are special guest vocalists, Mary Gauthier and Jaimee Harris.

Late in 2020 Malcolm released a limited edition preview of the album on vinyl. The August release will come out on CD and all digital platforms.

Music editor for Nashville.com. Jerry Holthouse is a content writer, songwriter and a graphic designer. He owns and runs Holthouse Creative, a full service creative agency. He is an avid outdoorsman and a lover of everything music. You can contact him at JerryHolthouse@Nashville.com
Previous Leftover Salmon Shares “Boogie Grass Band” For 4/20
Next NMAAM To Honor Quincy Jones, Lionel Richie, Smokey Robinson & Fisk Jubilee Singers