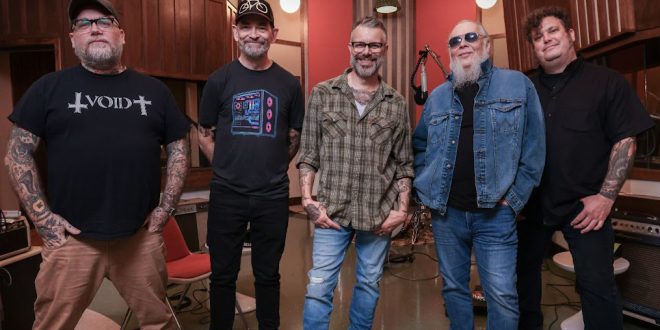 Memphis rock/alt-country band Lucero releases their new single “Raining for Weeks” from the upcoming album Should’ve Learned by Now, out February 24 via Liberty & Lament/Thirty Tigers. With a soulful piano and a plucky acoustic guitar, the song offers a meditative rumination on mistakes made and love lost. It is accompanied by a music video featured this morning at Garden & Gun, who said the “ballad-like melancholy falls into equilibrium over jaunty piano, Nichols’s tenacious vocals, and old-school guitar drones.”

“This was a new guitar part that I wrote while playing guitar and chasing my daughter around the basement,” explains bandleader Ben Nichols. “It reminded me of something I might hear in a Wes Anderson film. Maybe one was on TV while we were playing. For such a simple little song, it has some of my favorite lyrics on the album, suggesting the narrator has been completely unaware of the consequences of his actions.”

Should’ve Learned by Now is a reflection of a band that knows itself. Since forming in Memphis in the late 90’s, Lucero has evolved and embraced everything from southern rock to Stax-inspired Memphis soul, while maintaining their distinctive sonic foundations. After exploring darker, more atmospheric landscapes on their two previous releases, the band’s 12th studio album finds them returning to their punchy driving rhythms and punk-rooted guitar licks. The record is already garnering early acclaim with Lucero’s two previous singles – “One Last F.U.,” which Rolling Stone declared “has the defiant, sneering energy of Lucero’s loudest recordings,” and “Buy a Little Time,” which BrooklynVegan said “finds them embracing fuzzed-out, anthemic heartland rock, sounding like Tom Petty jamming with Crazy Horse but in the way that only Lucero can.”

Led by the gravelly voice of singer/songwriter Ben Nichols, Lucero also features original members Brian Venable on guitar, Roy Berry on drums, John C. Stubblefield on bass and Rick Steff on keys. The group of Memphis road-dogs has maintained a large and dedicated fanbase for over 20 years, delivering a rowdy and communal live experience that is equally as exhilarating in a dive bar as it is in amphitheaters. NPR Music has called them “the rare kind of band with enough spirit to fill an arena, but with its heart planted firmly in the garage.”

Look for Lucero January 4th at the Ryman Auditorium.

Music editor for Nashville.com. Jerry Holthouse is a content writer, songwriter and a graphic designer. He owns and runs Holthouse Creative, a full service creative agency. He is an avid outdoorsman and a lover of everything music. You can contact him at JerryHolthouse@Nashville.com
Previous Beloved Nashville Music Writer And Musician Peter Cooper Passes
Next FIRST LOOK: Eric Church’s “Chief’s” On Broadway