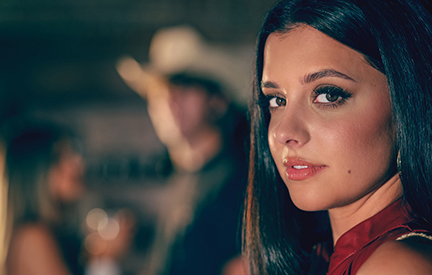 23-year-old up-and-comer artist/songwriter Lanie Gardner today releases her first original song with heartbreak anthem “Better Luck Next Guy.” (listen above) Flashing side-eyed swagger and strutting with confidence of a late night out in a little black drerss, Gardner tells a romantic rival to step off in the brand-new track.

“Two years of waiting to put out my own music since ‘Dreams’ cover – it has been torture…,” Gardner shared on socials. “We’ve finally made it! Thank y’all so much for sticking with me. Time has come. Up from here…”
Written by Gardner, Knox Morris, Spencer Jordan, and Kalie Shorr, plus Logan Maggio tagged with both writer and producer credits, the riser first gained international attention with her Fleetwood Mac cover of “Dreams.” Amassing over 150 MILLION impressions across socials and streaming platforms, her viral cover video also caught the eye of Fleetwood Mac’s Mick Fleetwood, who commented “absolutely blown away by this” on Gardner’s TikTok post.

This breakout moment fueled David Guetta to spotlight Gardner on his rendition of “Dreams” (watch below) with Morten, earning over ONE MILLION Spotify streams in the first 72 hours. Bringing her dreams to the road, Gardner was a special guest in select cities on the Jonas Brothers’ REMEMBER THIS TOUR in 2021.

A Nashville, TN, local by way of Burnsville, NC, Gardner’s passion for music was instilled by her grandfather, who also dreamed of becoming an artist. She began singing at the age of four and writing songs by 12 years old. Influenced by her Classic Rock and Country upbringing, Gardner is quickly captivating audiences with her fresh sound and laid-back, goofy, magnetic personality.
Gardner has been in the studio, writing and recording new original music expected to come in 2023.

Music editor for Nashville.com. Jerry Holthouse is a content writer, songwriter and a graphic designer. He owns and runs Holthouse Creative, a full service creative agency. He is an avid outdoorsman and a lover of everything music. You can contact him at JerryHolthouse@Nashville.com
Previous Bonnaroo 2023 Tickets Go On Sale November 25
Next WATCH: Dierks Bentley’s “High Note” Featuring Billy Strings