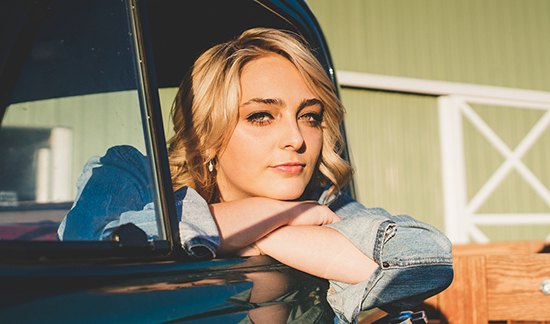 LISTEN: HunterGirl’s “Hometown Out Of Me”

“It’s only been five months since HunterGirl ended her journey on American Idol, where she finished in second place, but she’s already making big moves in her Country music career. HunterGirl today releases her first new music since wrapping the show with the deeply personal track “Hometown Out Of Me.” Listen now HERE.

“My hometown has supported my dream since I was little and especially through this crazy year of my life,” share HunterGirl. “I wanted my first single following the show to be a thank you card to my hometown. The reason I get to chase my dream is because of the amazing people who have supported me. No matter where this journey takes me, I will never forget where I came from.”

Writing the song once she returned to Nashville from filming American Idol in Los Angeles, the idea came to her when she was in line at the grocery store in her hometown of Winchester, Tennessee with her mom, and noticed people in town had bought ads in their local paper to cheer her on during her Idol journey. Showing her appreciation to where she grew up and saying thank you to her community the only way she knows how, she wrote “Hometown Out Of Me” with Laura Veltz and producer Jimmy Robbins.

Currently hustling out on the road, most recently with Justin Moore and Tracey Lawrence, HunterGirl will kick-off her co-headlining tour with this year’s American Idol winner Noah Thompson on Thursday, October 27 in Columbus, Ohio.

A Tennessee native, singer/songwriter HunterGirl has been performing since she was three years old and writing songs since she was 9. In her early teens, she performed at venues across the United States, competed in singing competitions and won the 2014 Texaco Country Showdown. After graduating high school, she moved to Nashville and immediately started playing gigs at Nashville’s most famous venues including Tootsie’s, Rippy’s, Jason Aldean’s Bar, The Listening Room, and HonkyTonk Central, winning songwriting contests such as “Nash Next” and the prestigious “Nashville Songwriter Association International” in her spare time. Due to having family members who served in the military, HunterGirl holds a deep admiration for our country’s armed forces and tenaciously works with many veteran organizations, where she uses music therapy to transform veterans’ stories into songs.

Music editor for Nashville.com. Jerry Holthouse is a content writer, songwriter and a graphic designer. He owns and runs Holthouse Creative, a full service creative agency. He is an avid outdoorsman and a lover of everything music. You can contact him at JerryHolthouse@Nashville.com
Previous PREMIERE: Feelz’s “Wake Me Up”
Next Dax Exposes Mental Health Realities In New Song, “Depression”