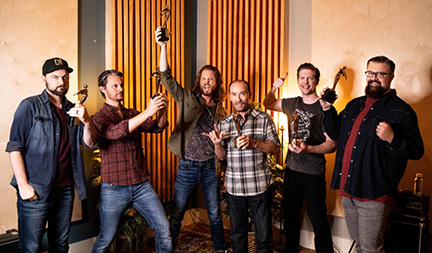 Even as COVID-19 had the music business stalled, America’s well-known patriot Lee Greenwood, award-winning vocal group Home Free, and members of the UNITED STATES AIR FORCE BAND collaborated virtually to create a new version of “God Bless The USA,” which was written by Greenwood in the early 80s. This special collaboration was released during July 4th weekend in 2020 and as we recently celebrated the one-year anniversary with over 200 million views through all social media platforms, the performers are also celebrating the 2021 Telly Award win for “Most Viral Video”.

“God Bless The USA is timeless and five times a year during President’s Day, Memorial Day, July 4th, 9/11, and Veterans Day I get requests to do events and perform it,” says Greenwood. “This version just happens to be special because it includes the US Air Force Band and was arranged and put together by Home Free, who are an amazing vocal group. I have been inundated with questions about this version and how it came together as people just love the feel of it. Now to win an award and know that almost one-third of our entire US population has heard this version is astounding to me.”

“Working with Lee Greenwood on such an iconic song was amazing and intimidating, at the same time. First off, we didn’t know how to top the original. Secondly, we were in a pandemic situation with members of the group in different states. Then add in the US Air Force Band. All of us had chill bumps on the final outcome that we all immediately were in agreement to make a video,” says Home Free’s Austin Brown. “How could we make a video in so many places was the first thought. Then our team was able to make it all happen and we were thrilled to release it in time for July 4 of last year. It was an honor to be part of this creative work and what an honor now to win a Telly Award for ‘Most Viral Video’ with over 200 million views across all social platforms.”

Founded in 1979, The Telly Awards honor excellence in local, regional, and cable television commercials as well as non-broadcast video and television programming. With the recent evolution and rise of digital video (web series, VR, 360 and beyond), the Telly Awards today also reflects and celebrates this exciting new era of the moving image on and offline. The Telly Awards annually receive over 12,000 entries from all 50 states and 5 continents, showcasing the best work created within television and across video, for all screens.

Music editor for Nashville.com. Jerry Holthouse is a content writer, songwriter and a graphic designer. He owns and runs Holthouse Creative, a full service creative agency. He is an avid outdoorsman and a lover of everything music. You can contact him at JerryHolthouse@Nashville.com
Previous Toby Keith’s “Has a Peso In My Pocket” Drops Oct. 15
Next LISTEN: Matt Rogers’ “Be Like Him”