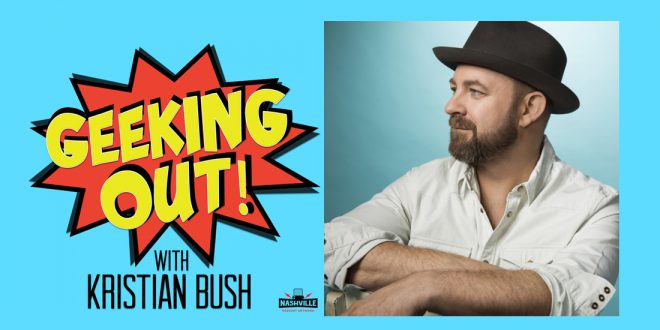 Wheelhouse Records’ recording artist and one-half of the Grammy-winning duo, Sugarland, Kristian Bush has announced the launch of his new podcast, Geeking Out! With Kristian Bush, debuting tomorrow, January 23. In each episode, Kristian will sit down with a guest to talk about something they’re obsessed with that has nothing to do with their job; he’ll also share an artist, song, or album that’s got him “geeking out.” Episode One features his friend and label-mate Granger Smithdiscussing his new favorite hobby: beekeeping.
With the goal of celebrating the fan in all of us, the 12-episode season will feature Kristian chatting with influential tastemakers and everyday people from all walks of life. Joining him for Season One are guests including Academy Award-winning screenwriter andNashville creator Callie Khouri, actress, producer, and songwriter Rita Wilson, Jean-Claude Van Johnson star Kat Foster, country music journalist Hunter Kelly and more.
“Everyone is into something: a show they have been binging, a new skill they just learned, a book they can’t put down—something—and when you ask people about what they’re currently into, the answer is always filled with passion,” said Kristian Bush. “I love hearing that excitement, learning about new things, and I’m hoping listeners will connect with it,too, and maybe even pick up a new interest.”
Nashville Podcast Network is an eclectic collection of seven different podcast series from a variety of Nashville-savvy hosts like Jake Owen and the network’s creator, Bobby Bones. The network gives listeners an inside look at the lifestyle and pop culture of Nashville, with country music interviews, behind-the-scenes looks into country music, inspiring stories, and topics like fashion, beauty, and country music news. Other series in the network include BobbyCast, Good Company with Jake Owen, Whiskey Riff Raff, Velvet’s Edge with Kelly Henderson, The Frontline Generation with Marjorie K. Eastman, and BoBo and Mikey.
Geeking Out! With Kristian Bush will be available for download across all podcast platforms, including iHeartMedia.