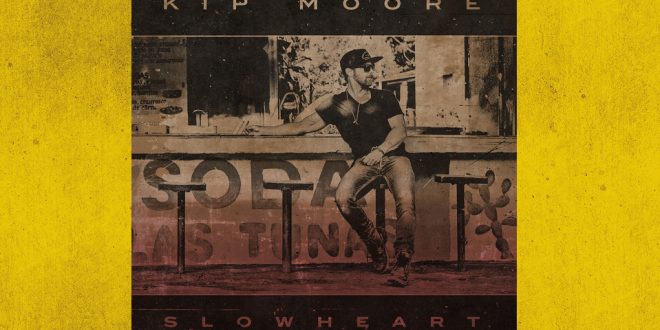 Today Multi-platinum singer/songwriter Kip Moore revealed the cover for his upcoming third studio album Slowheart, available Sept. 8.  Moore, who was inspired to name the release after his fiercely loyal fans who have adopted the name Slowheart themselves and who “defines himself by his honesty, which feeds directly into his music, which earned him a fan base of die-hards and helped make him a breakout star in Nashville. The cover image, taken in Costa Rica during Kip’s extended break earlier this year.

“My former guitar player called me a ‘slowheart’ many years ago, claiming I don’t just jump the gun and show all my cards or my emotions on what I truly feel,” said Moore. “He always said ‘you’re a slowheart, man…you observe before you act.’ I eventually named the band the slowhearts, and my fans are the slowhearts too. And so, its only fitting that the record I’ve been waiting to make, was named Slowheart.”

Moore first turned heads with his debut album Up All Night which was certified gold by the RIAA and spawned three No. One hit singles including gold certified “Beer Money,” platinum certified “Hey Pretty Girl,” and the double platinum breakout hit “Somethin’ ‘Bout A Truck. Following an extended break, Moore is back out on the road playing some of country music’s biggest festivals this year, as well as headlining dates in U.K this fall stopping in Birmingham, UK (10/2), Manchester, UK (10/3), Glasgow, UK (10/4) and culminating in a special show as part of Country Music Week in London, UK at O2 Shepherd’s Bush Empire on 10/6. Moore will also return to Ireland later this summer for Harvest 2017, stopping in Westport, IE (8/26) and Enniskillen, IE (8/27.) For more information and a fill list of tour dates, visit kipmoore.net.