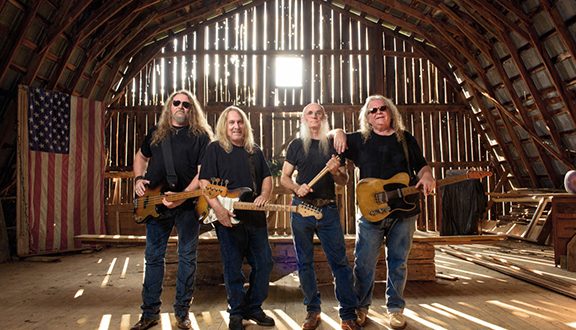 To celebrate the 30th anniversary of the smash album, the band has announced a rare live performance in Nashville: “The Kentucky Headhunters: Pickin’ on Nashville and Beyond.” The concert is set for Friday, June 28 at 8:00 p.m. at The Basement East. Budding southern rock group The Georgia Thunderbolts will open for the band.

“The Heads have traveled the universe musically, starting as Itchy Brother in 1968, on the family farm in the infamous Practice House, then morphing into The Kentucky Headhunters in 1986,” says founding member Richard Young. “We have lived a blessed and charmed life with family, friends and music.

Their first album, 1989’s Pickin’ on Nashville, was released by Mercury Records and surprised the world, becoming a bona fide hit, selling over two million copies. The album won a GRAMMY Award, three CMA Awards, an American Music Award and an ACM Award. It spawned four consecutive Top 40 country hits: “Walk Softly on This Heart of Mine,” “Dumas Walker,” “Oh Lonesome Me,” and “Rock ‘n’ Roll Angel.” The Kentucky Headhunters are Richard Young, Fred Young, Greg Martin and Doug Phelps. To date, the band has released 15 albums and sold over 11 million records worldwide.

Tickets are $24.00 in advance and $28.00 on the day of show. Purchases can be made at thebasementnashville.com. The Basement East is located at 917 Woodland Street in Nashville.

Music editor for Nashville.com. Jerry Holthouse is a content writer, songwriter and a graphic designer. He owns and runs Holthouse Creative, a full service creative agency. He is an avid outdoorsman and a lover of everything music. You can contact him at JerryHolthouse@Nashville.com
Previous Merle Monroe Releases Debut Album
Next Charlie Daniels Set To Speak And Perform At Veteran Impact Celebration