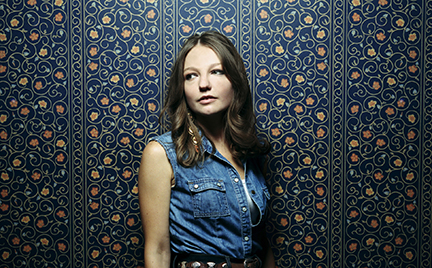 Acoustic amplification company, LR Baggs , has released a new Americana session from Kelsey Waldon . One of Nashville’s founders of the female-pioneered twang revival, Waldon’s distinct sound meets at the juncture of classic country, bluegrass, soul, R&B, and rock and roll.

The influence of songwriting greats like John Prine, Bob Dylan, and Townes Van Zandt, can be heard in Waldon’s performances of “Having Hard Times”, “Run Away”, and “White Noise.” Waldon uses the LR Baggs Lyric and is joined by Mike Khalil on electric guitar and B-Bender, Alec Newnam on electric bass, and Nate Felty on drums.

The fourth annual LR Baggs Americana Sessions will continue to feature more talented Americana artists in through the end of 2018 and into early 2019. Previously featured this year are Molly Tuttle , Lera Lynn and Chance McCoy . The LR Baggs sessions have reached over four million combined views on YouTube this year.

Kelsey Waldon captures the rugged country sound of her touring band without sacrificing the intimacy of her songwriting. Waldon is native of Monkey’s Eyebrow, Kentucky, who took an interest in singing, songwriting and playing guitar as a child. After moving to Nashville, she earned a college degree and cultivated a loyal following through two acclaimed albums and frequent touring across the U.S. That persistence paid off with performance slots on the Grand Ole Opry and an invitation to open shows for John Prine, as well as many others, in 2018. Look for her forthcoming album in 2019.

Music editor for Nashville.com. Jerry Holthouse is a content writer, songwriter and a graphic designer. He owns and runs Holthouse Creative, a full service creative agency. He is an avid outdoorsman and a lover of everything music. You can contact him at JerryHolthouse@Nashville.com
Previous Chris Lane Earns His First Platinum Single
Next Della Mae Sets The Station Inn On Fire