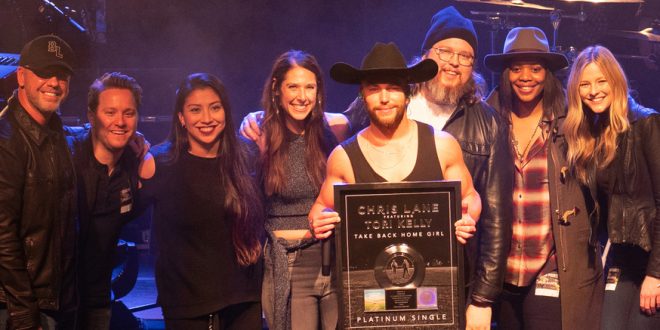 Performing for a sold out crowd at New York City’s Irving Plaza last night (12/13), Big Loud Records’ Chris Lane was surprised on stage by label President Clay Hunnicutt with news that his smash single “Take Back Home Girl” is officially certified Platinum by the RIAA for exceeding 1 million equivalent sales in the U.S. Marking his first-ever Platinum hit, Lane was presented a plaque to commemorate the milestone moment.

Currently on the road for his coinciding headline Laps Around The Sun, Lane is finishing the trek’s final 2018 stops with four consecutive sold-out shows in the Northeast this weekend. After stunning wall-to-wall crowds in Boston, MA, (12/12) and New York, NY, (12/13), he will take the stage tonight in Asbury Park, NJ, before heading to Philadelphia, PA (12/15).

Due to increasing demand, Lane has added four additional shows of the Laps Around The Sun in January 2019, officially wrapping the tour with a hometown show in Charlotte, NC, at Coyote Joe’s on January 19. Tickets are available now at iamChrisLane.com.

Music editor for Nashville.com. Jerry Holthouse is a content writer, songwriter and a graphic designer. He owns and runs Holthouse Creative, a full service creative agency. He is an avid outdoorsman and a lover of everything music. You can contact him at JerryHolthouse@Nashville.com
Previous Springsteen’s “Born To Run” Recreated With Ukulele
Next Kelsey Waldon Joins 2018 LR Baggs Americana Sessions Lineup