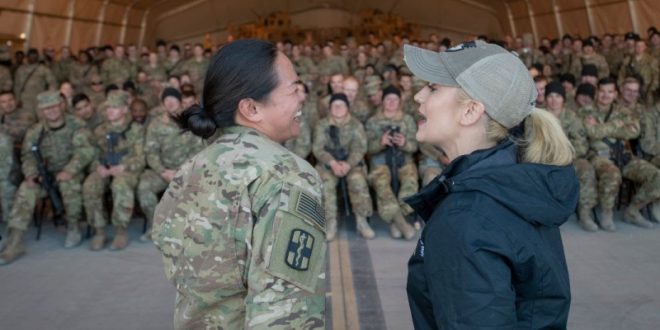 As an avid supporter of the U.S. Armed Forces, country singer-songwriter and actress Kellie Pickler will help lead the effort for Americans to give more than thanks to the military community as a USO Global Ambassador, in honor of the 80th anniversary of the United Service Organizations.

“I am honored to join the USO as a Global Ambassador for their 80th anniversary of supporting America’s military and especially this campaign encouraging all Americans to give more than thanks,” shares Pickler. “The USO has allowed me so many opportunities to serve those who serve us, and this is another way I can help shine a light on something that matters…supporting our servicemen, servicewomen, their families and letting them know we don’t take what they do for granted.”

Pickler, alongside USO Global Ambassador Wilmer Valderrama, will support the organization’s Give More Than Thanks initiative – a campaign encouraging all Americans to find actionable ways to express their gratitude for the service and sacrifice of our troops and their families. Throughout the year, Pickler and Valderrama will participate in events and entertainment engagements for service members, raise awareness of our military’s needs, and share ways Americans can help the USO give more than thanks.

“We are honored to have these two longtime advocates come on board as USO Global Ambassadors,” said J.D. Crouch II, USO CEO and president. “Kellie and Wilmer have seen, firsthand, the importance of the USO mission and the impact it can have when we express the nation’s gratitude to our Armed Forces. We hope their continued support will invite more Americans to join them to honor the sacrifice and service of service members and their families.”

Pickler performed on her first USO Tour in 2007 to Iraq and has since completed 12 total tours, visiting 13 international locations including Afghanistan, Germany, Iraq, Kosovo, United Kingdom, Iraq, Kuwait, Bahrain, Kyrgyzstan, Italy, Spain, Turkey, Norway; a ship at sea; and three domestic locations. Of her 12 tours, Pickler has participated in five annual USO Holiday Tours with the Chairman of the Joint Chiefs of Staff.

Additionally, Pickler has participated in a USO Military Virtual Programming (MVP) session with husband Kyle Jacobs, which was broadcast to 34 locations in the United States, Qatar, Guam and Japan, and she is a recipient of the Department of Defense Spirit of Hope Award, Operation Troop Aid Chris Kyle Patriot Award and USO of North Carolina’s Heart for the Warrior Award.

Music editor for Nashville.com. Jerry Holthouse is a content writer, songwriter and a graphic designer. He owns and runs Holthouse Creative, a full service creative agency. He is an avid outdoorsman and a lover of everything music. You can contact him at JerryHolthouse@Nashville.com
Previous Watch: Home Free & Don McLean Go A Cappella On American Pie
Next Kenny Chesney Invites Fans To Pick New Rum Flavor