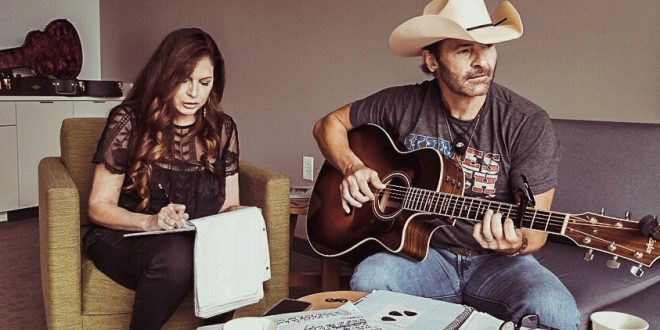 Keith Burns, founding member of the Grammy-nominated trio Trick Pony, is slated to appear on Inside Edition (Syndicated-ABC/CBS/Fox) on Friday, August 16, 2019.
The special segment (filmed in Nashville, Tennessee) was prompted by the show’s investigative journalist, Lisa Guerrero, who teamed with Burns to co-write and record a country song titled “Everybody Loves A Comeback” * (penned by Burns and Guerrero and slated to be released under the Stroudavarious Records Nashville imprint). The Burns/Guerrero songwriting session, and pairing, was originally spawned by a 10-year-old $20 wager that Guerrero accepted to write a country tune. In late June, the two completed the song and recorded the track in less than a 24-hour period at Loud Studios in Nashville.

“This began as a result of a $20 bet challenging me to write a country music song in 24 hours. I took that bet 10 years ago and, today, it’s a magical dream come true,” Lisa Guerrero said. “I never imagined I would write, much less sing, a song recorded by country music greats James Stroud and Keith Burns. What a miracle.”

“The storyline is about a soldier that is deployed and a letter that he carries with him–written by his wife. Her words keep him holding on each day to make it home to his baby. The chorus is a bit of play on words,” Keith Burns added. “The recording process with the ladies was sentimental and heartwarming, and I think listeners will hear the emotion in the background vocals. We kept the production old school, simplistic and honest to let the lyrics sing; we’re very proud of the outcome.”

Music editor for Nashville.com. Jerry Holthouse is a content writer, songwriter and a graphic designer. He owns and runs Holthouse Creative, a full service creative agency. He is an avid outdoorsman and a lover of everything music. You can contact him at JerryHolthouse@Nashville.com
Previous Music City Roots Returning In A Big Way
Next NMAAM Receives Major Donation From Music City Center