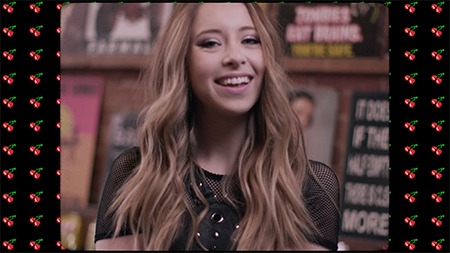 CMT Next Women of Country member Kalie Shorr has released the color-filled instant grat music video for her new single, “Candy,” from her latest EP Awake, available here. “Candy” was filmed at Rocket Fizz, a candy and soda pop shop located in downtown Nashville. The video launched exclusively on Apple Music and can be viewed here.

“Candy was one of the most fun songs to record on the album, but I really fell in love with it after playing it on tour. I’ve had so many ideas buzzing around my head for the visuals of this song and I couldn’t be more excited for this to be the next single,” said Shorr.

“Last week, I saw Jimmy Eat World play an amazing set at the Ryman and just a few days later I got to play on the same stage,” Shorr said. “Walking up the back steps was such a surreal feeling and all I could think about was how much history that back alley held. It was such an honor getting to pay tribute to two of my favorite female artists Bobbie Gentry and Kitty Wells and celebrate everything that makes country music such incredible.”

You can catch Kalie playing several CMA Fest stages in June, including the Gildan Broadway Stage at Hard Rock Cafe on Friday, June 8.

Music editor for Nashville.com. Jerry Holthouse is a content writer, songwriter and a graphic designer. He owns and runs Holthouse Creative, a full service creative agency. He is an avid outdoorsman and a lover of everything music. You can contact him at JerryHolthouse@Nashville.com
Previous Liz Cooper & The Stampede New Album Drops August 10
Next Bonnaroo 2018 Tickets & Daily Lineups!