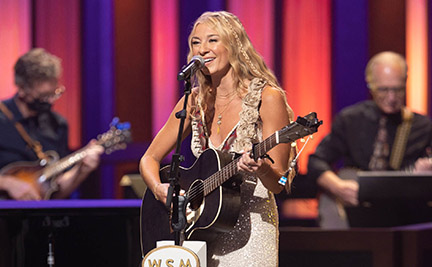 Last Saturday (7/16), Julia Cole made her Grand Ole Opry debut. The up and coming singer wore a sparkling floor-length gown embellished with “upcycled” fabric from her late Grandfather’s western-style shirt and jewelry made from the shirt’s pearl-snaps. His absence was the one sad note as friends and family gathered from Texas and Louisiana to join the audience, all of whom were misty-eyed as Julia sang “White Pearls,” a tribute to fearless mothers and their “daughters, turned to mothers, raising their own baby girls” which she wrote as a birthday gift for her grandmother.

Cole also performed her streaming hit, “Thank God We Broke Up,” which was rush-released in April after her TikTok tease went viral – the single is on Julia’s new Whole ‘Nother Margarita EP (7/15) and the video has been added to CMT rotation.

The Houston native got her start performing the Anthem before her own high school volleyball games, which led to performing at NFL, MLB, NASCAR and ESPN events. Julia credits athletics for her team-player mindset and determination and, as a women’s athletics advocate, she has fundraised for women’s sports initiatives for the Boys & Girls Clubs of Middle Tennessee and as an ambassador for Mizuno Athletic Wear, who uses Julia’s “Honey Child” in their women’s empowerment campaign.

Music editor for Nashville.com. Jerry Holthouse is a content writer, songwriter and a graphic designer. He owns and runs Holthouse Creative, a full service creative agency. He is an avid outdoorsman and a lover of everything music. You can contact him at JerryHolthouse@Nashville.com
Previous WATCH: Alana Springsteen’s “Trust Issues”
Next CMA Launches Women’s Leadership Academy