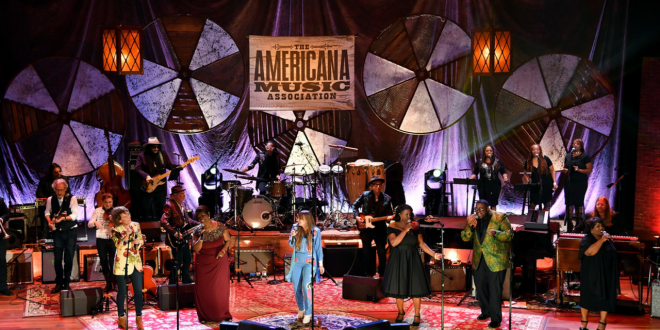 The Americana Music Association® celebrated distinguished members of its community tonight and revealed the winners of the 17th annual Americana Honors & Awards at the historic Ryman Auditorium. A generation-bridging group of musical innovators garnered coveted awards, including John Prine (Artist of the Year), Jason Isbell and the 400 Unit (Album of the Year, Song of the Year and Duo/Group of the Year), Tyler Childers (Emerging Artist of the Year) and Molly Tuttle (Instrumentalist of the Year).

Isbell and his band the 400 Unit swept the annual member-voted categories with a total of three awards: Album of the Year “The Nashville Sound,” produced by the ubiquitous Dave Cobb; Song of the Year for “If We Were Vampires,” written by Isbell; and, Duo/Group of the Year.

Also honored by the Americana music community are rising roots stars like Tyler Childers, who was named Emerging Artist of the Year after an impressive touring and sales year lead by his debut “Purgatory.” Bluegrass virtuoso Molly Tuttle was recognized with her first Americana trophy in the category of Instrumentalist of the Year.

For nearly two decades, the Americana Honors & Awards program has provided a unique platform for commemorating the best and brightest musicians in the Americana music scene while showcasing once-in-a-lifetime performances.

This evening, Americana powerhouse Brandi Carlile championed individuality with her anthemic “The Joke” and k.d. lang effortlessly crooned her signature, “Trail of Broken Hearts.” Rock and Roll Hall of Fame member Buddy Guy reminded the world of why he’s the godfather of Chicago blues with a scorching rendition of “Damn Right, I’ve Got the Blues.”

Harmony-laced trio I’m With Her (Sara Watkins, Sarah Jarosz and Aoife O’Donovan) and game-changing newcomers like Anderson East, Courtney Marie Andrews, Margo Price and Nathaniel Rateliff & the Night Sweats left it all on the famed Ryman stage, while serving as a testament to the radiant future of this beautiful art form encompassing folk, country, blues, soul, rock and roots music.

“I am continually humbled to experience the caliber of talent that gathers under one roof for one incredibly special night of the year,” said Jed Hilly, Executive Director of the Americana Music Association. “I have nothing but absolute reverence for every single one of these musicians and am looking forward to witnessing more of their evidently fruitful careers for years to come.”

Music editor for Nashville.com. Jerry Holthouse is a content writer, songwriter and a graphic designer. He owns and runs Holthouse Creative, a full service creative agency. He is an avid outdoorsman and a lover of everything music. You can contact him at JerryHolthouse@Nashville.com
Previous Americana Honors & Awards Winners
Next Carrie Underwood Will Flip the Switch at 10th Annual “Opry Goes Pink”