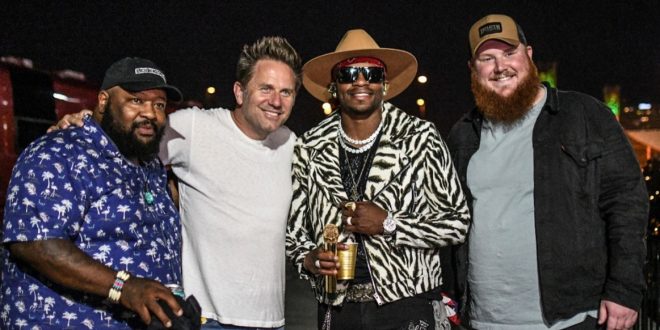 In an expansion of their respective business ventures, Jimmie Allen, Aaron Benward and John Marks have launched JAB Entertainment, a full-service management and production company. The trio serve as partners for the company, which is based in Nashville.

Marks was most recently Global Director of Country Music at Spotify. In that role, he was instrumental in growing the music streaming platform’s Hot Country brand, championing new artists, and establishing Spotify’s footprint in Nashville.

JAB Entertainment’s inaugural artist sign is Neon Union – the first Black & white duo in country music – comprised of Leo Brooks & Andrew Millsaps. After seeing both perform as solo artists, Allen introduced the two of them with the suggestion to join forces for a first of its kind duo. The connection was instant and their sound different than anything that had come before – 808 kick drums married to a traditional country lyric and anthemic pop melodies. Their first single, “Beer Up” is slated to drop on December 30 through a distribution deal with EMPIRE. They can currently be heard on the track “Livin’ Man” off Allen’s latest album Bettie James Gold Edition. Connect with them on Instagram, TikTok and https://www.neonunionmusic.com/.

“I’ve been friends with Aaron for years – he’s a brother to me,” Allen says. “We’ve always wanted to work together and decided to launch JAB Entertainment.”

“Jimmie has been my little brother ever since he moved to Nashville. We’ve written songs together, played basketball together, endured tough times together and gone through the greatest of times together – but now it’s time to build together, and that’s why we started JAB Entertainment,” states Benward.

Of joining as partner, Marks says: “It wasn’t long ago that Jimmie and Aaron invited me to see their new duo Neon Union in Nashville. I watched their set, saw their on stage chemistry and knew I needed to be a part of this history making duo. It’s an honor to be joining JAB Entertainment with Jimmie and Aaron and to bring Neon Union’s message of great music, BIG fun and unity to the world.”

Brooks grew up in Miami and was first handed an acoustic guitar by his father and introduced to the music of George Jones and Hank Williams at the age of four. His first audition was for the legendary Lauryn Hill right out of high school, for whom he eventually became her Musical Director. Brooks went on to become a GRAMMY Award-winning collaborator for artists including Pitbull, Hill, Jennifer Lopez, Mary J. Blige, Ceelo Green and John Legend.

Millsaps was born in Surry County, NC and started playing guitar and writing music at 13. The official start to his musical career began by playing for his friends and family around kitchen tables and weekend bonfires. He began performing at local venues while attending NC State University and was a semi-finalist in the “Music City Song Star Competition.” He also earned first place in The Merlefest “Chris Austin Songwriting Contest.”

“Not only are they the first Black and white duo in country music history; they are insanely talented with great work ethic.” Allen notes of Neon Union. “Not only do they make great music, but they will change hearts.”

“Neon Union is the perfect example of what we want to do at JAB Entertainment,” adds Benward. “And that is to expand equality and unity, to shine the light on unconditional love and acceptance for diversity, and give the music world something it’s never seen.”

Music editor for Nashville.com. Jerry Holthouse is a content writer, songwriter and a graphic designer. He owns and runs Holthouse Creative, a full service creative agency. He is an avid outdoorsman and a lover of everything music. You can contact him at JerryHolthouse@Nashville.com
Previous Tootsies To Sponsor No. 99 Chevrolet With Driver Daniel Suárez
Next Carrie Underwood Kicks Off Vegas Residency