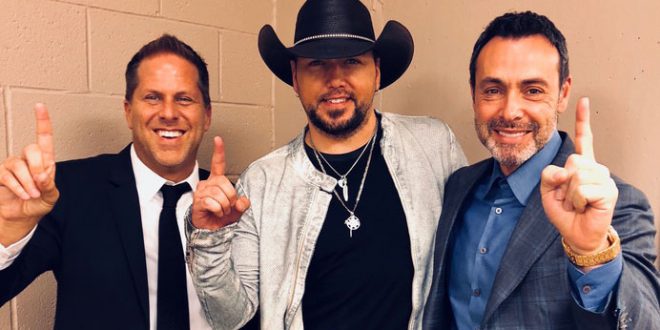 BMG and BBR Music Group have officially scored the Number One album in the U.S. with the Billboard 200 chart-topping debut of Jason Aldean’s Rearview Town (Broken Bow/BMG). The acclaimed set tallied a remarkable183,000 equivalent albums in its first week and is the first country album to lay claim to the top spot in 2018.

Aldean was recently awarded a historic third consecutive Entertainer of the Year at the 53rd ACM Awards in Las Vegas – the evening’s highest honor – and the awards’ first three-peat in a decade.
Jon Loba, EVP BBR Music Group, said “Having worked with Jason from album one, I am always amazed that with each new project he delivers on fan expectations, while at the same time continuing to evolve and develop new sounds that drive the genre forward. There are a few artists who can do that over the course of three to four albums, but it’s very rare for an artist to pull that off over eight albums and continue being commercially successful. Jason is in rarified air in that respect.”
Zach Katz, President, Repertoire & Marketing, BMG US, said, “Jason Aldean is an incredible force in music. His drive, determination, and creativity make his achievements limitless. This is an enormous accomplishment for an artist truly at the top of his game. We congratulate and thank the entire team at BBR, BMG, and Maverick Management for their tireless efforts and support. One year on together and it’s been nothing short of an exciting and inspiring partnership.”

Music editor for Nashville.com. Jerry Holthouse is a content writer, songwriter and a graphic designer. He owns and runs Holthouse Creative, a full service creative agency. He is an avid outdoorsman and a lover of everything music. You can contact him at JerryHolthouse@Nashville.com
Previous CMA Foundation’s Music Teachers of Excellence Awards Set For May 8
Next Florida Georgia Line Score 14th Number One