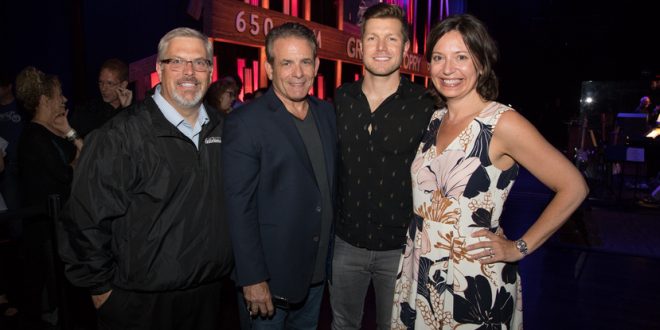 Black River Entertainment’s Jacob Davis achieved a career dream Friday night as he made his debut on the most revered stage in country music, The Grand Ole Opry. With a live show that has ledCountry Living to dub him “a bona fide star,” and Taste of Country raving “a showman, appropriate for someone raised where the Louisiana Hayride broadcasts still echo,” Davis stood confidently in “the circle” surrounded by friends and family who made the drive up from his hometown of Shreveport for this once-in-a-lifetime music moment performing “What I Wanna Be,” a song he wrote with Forest Glen Whitehead and Adam Hambrick that Whitehead produced (Kelsea Ballerini), as well as “James Brown,” lending to the “funk and soul” monikers that permeate his songs (Taste of Country).

“This floor is literally cracking underneath my feet, and you have no clue how incredible this feels,” he said standing in the Opry circle in his weathered Tony Llama boots. Stumbling over words from anticipation of that first note, the Shreveport-native introduced the audience to “What I Wanna Be” simply saying, “I think… this is what a guy oughta say to a girl…”

Written with Scott Stepakoff and Jason Gantt, Davis had some surprise accompaniment join him for his second song, “James Brown.” “I was raised on 90’s country, and a little soul, a little funk, just a great mixed bag of music… I figured Elvis brought a little funk when he played here, so…,” and with that he brought out two horn players to accompany him.

“What I Wanna Be” is the first taste of what’s to come from Jacob Davis’ full-length album on Black River Entertainment, and the Louisiana-native recently returned to the Bayou state to film its music video. Directed by Josh Kranich, the backdrop for the performance driven music video is set in popular New Orleans’ live music venue Bamboula’s. With CMT’s “Summer of Music” underway and Jacob Davis as one of their 17 in 2017, he joined Cody Alan to talk about family, songwriting and life on the road.

About Jacob Davis:
Songwriter/artist Jacob Davis has been named one of CMT’s “17 Artists to Watch in 2017” and Taste of Country’s “RISERS.” Loving music from an early age, Jacob Davis learned how to play guitar at 15-years old and began performing publicly while he was in college. Upon graduation from LSU with a degree in environmental science, the Shreveport, Louisiana native spent a year working before realizing that his true calling was music. Soon after, he made the move to Nashville. In May of 2016, Jacob Davis signed a deal with Black River Publishing. Exactly one month later, he also signed a recording contract with Black River Entertainment.

Having already shared the stage with artists including Lady Antebellum, Hunter Hayes, Sam Hunt, Billy Currington and Kelsea Ballerini, fans have had a taste of his forthcoming album with the release of his debut single, “What I Wanna Be,” digitally available now. For more info on Jacob Davis please follow him on Twitter, Instagram, Facebook,YouTube, and at jacobdavismusic.com.