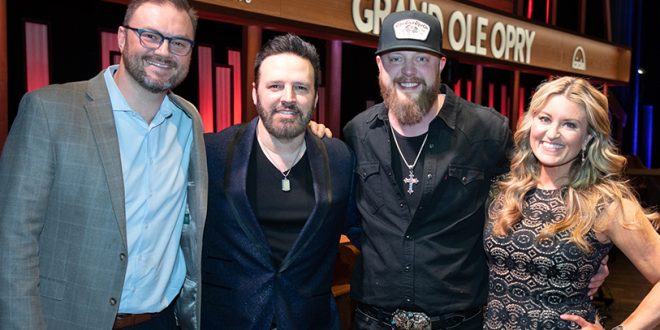 Country rocker Jacob Bryant debuted at the Grand Ole Opry last Friday, just one month after the release of his Bar Stool Preacher album. Bryant was announced by Grand Ole Opry member and No. 1 Billboard charting artist, Mark Wills. His powerful performance of “Heartbeat” and “Sometimes I Pray” received a standing ovation from the audience.

“I’m beyond grateful to have performed at such a historic venue like the Opry, which has played such a huge part in country music. To have had my wife, daughter and son as well as my team to experience this with me is an absolute blessing. God is good,” Bryant shared.

With over 2 million streams in less than one month, Bar Stool Preacher has landed in the Top 30 on Billboard’s Current Country Albums and Top New Artist Albums.

Produced by Bryant, Jesse Triplett, Brandon Metcalf, Noah Gordon and Jeff Catton, Bar Stool Preacher was recorded at South X Sea Studios in Nashville. Thirty Tigers, a global music marketing, management, distribution and publishing company recently inked its deal with Bryant and American Roots Records. “I think Jacob has it in him to be a major star, and I’m proud that he and his team picked us to help him realize his promise,” shared Thirty Tigers President David Macias.

Music editor for Nashville.com. Jerry Holthouse is a content writer, songwriter and a graphic designer. He owns and runs Holthouse Creative, a full service creative agency. He is an avid outdoorsman and a lover of everything music. You can contact him at JerryHolthouse@Nashville.com
Previous National Museum Of African American Music Celebrates One Year
Next LISTEN: Matt Jordan’s “Heart of the Heartland”