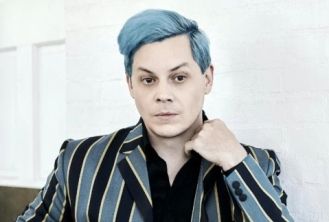 Today, Jack White has released his first of two new albums this year, FEAR OF THE DAWN, available everywhere now via Third Man Records. White’s second new album of the year, ENTERING HEAVEN ALIVE, will follow on July 22. Featuring singles “Taking Me Back” & “Hi-De-Ho (w/ Q-Tip),” as well as title track “Fear Of The Dawn.”

Fans have already begun to celebrate the new album at Third Man’s early listening parties in Nashville, Detroit and London last night. Independent Record stores in the US are also hosting listening parties today with some opening up at midnight before the dawn – head HERE for a full list. If that’s not enough, independent record stores around the world will have limited Fear Of The Dawn screen prints available with the purchase of the new record starting today.

Premiering earlier this week on Apple Music ahead of Fear Of The Dawn’s release, watch Jack’s in-depth interview about the new album and see him explore his hometown of Detroit with Zane Lowe above. In case you missed it, this week also saw the launch of The Jack White Twilight Receiver, an AR mobile application that allows fans to enter the musical world of FEAR OF THE DAWN and ENTERING HEAVEN ALIVE. The Jack White Twilight Receiver will continue to serve as an augmented reality world where exclusive content will be available to fans as ENTERING HEAVEN ALIVE approaches and over the course of The Supply Chain Issues Tour.

White’s Supply Chain Issues Tour officially gets underway tonight with the first of two sold out shows at Detroit’s Masonic Temple Theatre celebrating the release of FEAR OF THE DAWN, and then continues with shows in North America, Europe, and the United Kingdom through late August.

Music editor for Nashville.com. Jerry Holthouse is a content writer, songwriter and a graphic designer. He owns and runs Holthouse Creative, a full service creative agency. He is an avid outdoorsman and a lover of everything music. You can contact him at JerryHolthouse@Nashville.com
Previous 13th Annual Darius and Friends Set For June 6
Next LISTEN: Michelle Willis’ “How Come,” Featuring Michael McDonald